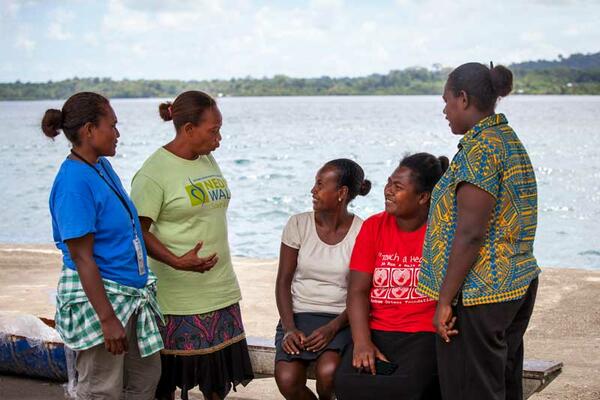 The tok stori revealed a lack of awareness of how climate change effected women in both rural and urban settings in Solomon Islands.
Source: File: IFC
By Ruth Maetala and Dr Michael Spann
Share
Wednesday, 22 September 2021 08:58 AM

Though tok stori people become part of each other’s stories to produce productive conversations and active sensemaking that can encourage collaborations, cooperation and innovation. Tok stori can also bring together people and stakeholders who might not often come together and give them the opportunity to ‘open their worlds’ to each other and learn.

This was certainly the case at a tok stori around climate change in Solomon Islands organised by Dignity Pasifik that attracted a diverse group that included SIG officials, scientists, NGOs, development practitioners, engineers and aerial surveyors. Interestingly, whilst all had participated in tok stori in cultural settings before, it became clear that being part of a tok stori in a professional setting was a unique experience and that, as professionals, they were more accustomed to more formal meetings. However, as the tok stori progressed some interconnected issues emerged that people realised influenced ongoing development processes and issues around climate change in Solomon Islands.

This was because some men and women were looking through more of a technical and scientific lens at issues surrounding climate change and therefore missed the everyday ‘lived experiences’ of women that those working at the grassroots and community level were more familiar with. This being the case, the tok stori opened new avenues of learning that may have not been there if the discussion was conducted in a more formal ‘western’ sense.

The second issue that emerged was when the tok stori was adapted and digital presentations were employed to ‘kick start’ stories. This brought into focus the supposed ‘gender neutrality’ of the use of technology and in the Solomon Islands setting, illustrated the issue of males dominating technology and putting women at the periphery when it comes to using technology for wider development challenges.

What became apparent during the tok stori was that COVID-19 had exacerbated this digital divide, meaning some women had felt less involved in some participatory processes during the pandemic which means upskilling women to counter these downsides. Pleasingly, the pathways opened on this issue through storying about them led firstly to offers of training and secondly, the realisation that there were women in the room who were adept in using technology. The second point emphasised that gender stereotypes around technology also needed to be problematised not just in Solomon Islands but in the wider Pacific.

Part of this beginning of a development of understanding was the acknowledgment that indigenous knowledges should not only be considered as valid because they provide a technical solution to a problem. This is because doing so would remove the wider relational cultural and social aspects that allows indigenous knowledges to be constructed, adapted and practiced by the owners of a locally defined problem.

The success of the discussion meant that participants and their organisations have arranged for a regular monthly tok stori. Importantly, tok stori goes beyond being only a knowledge gathering exercise but seeks to create and strengthen relationships to engender understanding. As such, future tok stori will continue to build relationships and connectedness between people and challenge assumptions as people from different fields and disciplines actively learn from each other to provide more locally led responses to climate change and development issues.

Ruth Maetala is the Founder and Managing Director of Dignity Pasifik, a development consulting company founded and led by Solomon Islands women. She has over 20 years’ experience in development work in the Pacific.

Dr Michael Spann is Research and Operations Director at Square Circle Global Development. He is also an adjunct lecturer in the School of Political Science and International Studies at the University of Queensland.