The Return of the Marsupial 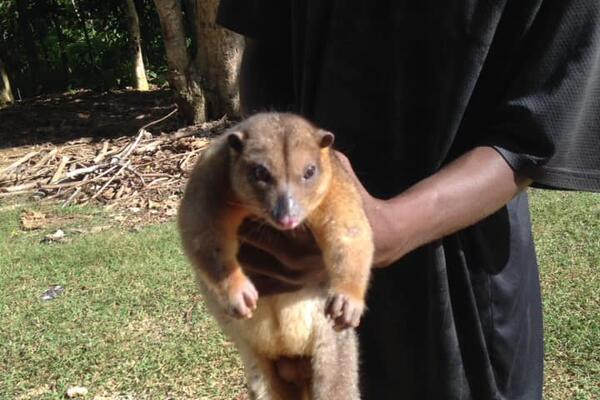 Since venturing into conservation, logging activities on Barana have stopped and villagers are now turning to eco-tourism activities to find ways to earn an income.
Source: Melinda Kii
By Georgina Kekea
Share
Tuesday, 12 May 2020 09:23 AM

Solomon Islands have the second highest terrestrial biodiversity in the Pacific.

But unsustainable logging, inappropriate land use practices and over exploitation of natural resources over the years have been a threat to the country’s biodiversity causing a loss of habitats, extinction of species and degraded ecosystems.

But for Barana on Guadalcanal this is changing.

Barana, a village established in the 1960’s by the tribal leaders of Tandai is now finding itself at the forefront of tourism since advocating more on conservation and the establishment of a nature and heritage park.

According to locals and tribal leaders of Tandai, Guadalcanal people from Mataniko-Tuvaruhu decided to move inland to use and cultivate on their tribal lands and to look after their forest, and land areas from increasing developments from Honiara City, and increasing informal settlements.

Since venturing into conservation, logging activities on Barana have stopped and villagers are now turning to eco-tourism activities to find ways to earn an income.

Unlike logging, when it comes to monetary value, most Solomon Islanders would say that there is no money in conservation.

But a majority of the villagers of Barana believe conservation is even more valuable than money itself.

“Our environment is about our resources, traditions, livelihood, history and the future. There are endless possibilities if we coordinate and plan our way of life”, Chief Chualu of the Barana community says.

With support from the Pacific Ecosystems-based Adaptation to Climate Change (PEBACC) a project from the South Pacific Environment Program (SPREP) and the government, the community of Barana was able to carry out their conservation plans.

The Barana Nature and Heritage Park continues to receive visitors and are now progressing with development plans for their park.

Recently, after two decades the community for the first time saw the return of the Northern common cuscus also known as the grey cuscus.

The northern common cuscus can be found in any substantially forested areas from coastal monsoon rainforest and gallery forest to remnant montane rainforest.

Though there is less concern the grey cuscus is on the brink of extinction, for the Barana community, the return of this marsupial signifies a new beginning.

“Since 2000 there used to be so many surrounding the community that at night you would literally hear them eating and moving around on tree tops while we sleep. We lost that for a while when most trees were gone.

"Now after the initiative of the Barana Nature and Heritage Park our hearts are overwhelmed just to see a very healthy one yesterday that was let go again to be in the wilderness”, Melinda Kii of Barana said.

To get to Barana, one has to go beyond Mt. Austen ridge. Typical to Mt. Austen, at Barana there are steep narrow ridges, rugged hills and deep valleys.

Both valleys are covered with secondary forests and dominated with a grassland area that stretches from the western end of the village to the furthest east where the Mataniko to Lungga lowland areas lower belt are located.

The Barana unique terrestrial areas, serves as habitat for ornamental, wild or native plant and tree, and protects the rivers which are source of drinking, cooking, bathing, washing for the local residence, but broadly downstream dependent people at peri-urban and settlements.