Stuck in New Zealand: the Experiences of Pacific Seasonal Workers 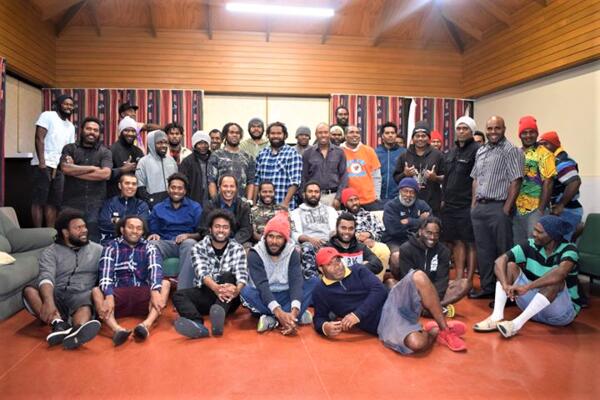 Employers and communities in Australia and New Zealand have supported Pacific seasonal workers throughout the pandemic. Most media reports concerning workers’ lack of employment and financial problems were raised by concerned employers, regional councils, Civil Defence, the Red Cross, and church and community groups.
Source: Supplied
By Rochelle Bailey
Share
Thursday, 23 July 2020 08:14 AM

It has been a long, exhausting, and stressful season for many seasonal workers and employers participating in New Zealand’s Recognised Seasonal Employer (RSE) scheme.

Workers have experienced much uncertainty with their employment, reduced hours, not being able to return to their families due to border closures, and relocating to new regions and workplaces. For employers, supporting workers has been challenging with sourcing new farms and accommodation, transferring workers, and dealing with the rigid bureaucracy that has not been flexible in supporting them.

What COVID-19 has revealed is employers will wear the brunt of responsibilities in these schemes, even beyond the scope of their employment contracts and terms, and with what many have argued, little support in sight. As Charlotte Bedford noted in her recent article on support for seasonal workers, recent changes have occurred to allow workers to be employed outside the scope of their limited purpose visas. This blog extends the discussion, highlighting the experiences of RSE workers and employers during the pandemic.

RSE workers have faced many challenges at this time, stranded beyond their visas, experiencing a lack of work opportunities, new locations, the introduction to new jobs, systems of online shopping, social separation, and constant accusations on social media platforms of carrying the virus in New Zealand and abroad.

urthermore, watching Cyclone Harold destroy their villages while they remained physically isolated from their communities has been an additional hardship. Although New Zealand communities have responded and supported RSE workers in various ways, and their incomes from New Zealand have helped families in the Pacific that have suffered employment losses and disasters, the dual impacts of Cyclone Harold and the COVID-19 pandemic have called into question the costs of participating in short-term labour migration.

Since the beginning of the pandemic, I have spoken to several agents and employers, 13 team leaders, host country community members and over 30 workers in general conversations. Most workers contacted me due to what they determined as either a lack of communication or rumours. The most recent rumour is that some workers are under the impression that they will be forced to remain in Australia and New Zealand to cover for the predicted upcoming shortfall in seasonal labour. The point of sharing this example is that information such as this has been shared widely, causing anxiety among workers. Although it is a rumour, and some workers are excited about the opportunity of an extension, there are many others who are anxious because they want to return home to their families and communities.

Employers and communities in Australia and New Zealand have supported Pacific seasonal workers throughout the pandemic. Most media reports concerning workers’ lack of employment and financial problems were raised by concerned employers, regional councils, Civil Defence, the Red Cross, and church and community groups. Many of these groups have set up fundraisers and have donated food, money and goods such as warm clothing for summer workers who remain stranded for the winter season.

Under the RSE policy, employers are obligated to provide pastoral care to seasonal workers. During the pandemic, the majority of employers have surpassed these expectations well beyond their contract terms. Like Australian Seasonal Worker Programme (SWP) employers, RSE employers have been contributing to workers’ living costs. This is not recognised enough. Neither is the fact that employers themselves have expressed a need for greater support, from both New Zealand and sending countries.

There is currently an oversupply of RSE workers. Across Australia and New Zealand there are groups of seasonal workers that have work and those that do not have enough, also reported in recently published devpolicy articles by Charlotte Bradford and Richard Curtain. Seasonal workers receiving enough hours have supported those without. For example, a group of RSE workers all contributed to another group by providing them with money to purchase groceries. Seasonal workers, from various countries, have been generous among each other and have been brought together through the COVID-19 crisis.

How well workers are coping with the enormous changes and uncertainties varies. We know that according to some employers they are coping reasonably well and others are reporting workers are depressed and frustrated. This also aligns with conversations with team leaders. Team leaders have been saying that since the border closures their work has increased in managing the general well-being of their teams. They reported an increase in alcohol consumption, drink driving, and workers becoming less compliant and resistant to rules.

Workers relocating to different farms or regions have added to existing stresses. This is new for most SWP workers but not unusual in the RSE. Under the RSE scheme, the joint Approval to Recruit (ATR) allows for employers to share workers in different regions. However, the majority of workers are not under ATR contracts. Due to limited employment options workers have been introduced to new regions and crops where they are learning new skills. Although happy to be working, some mentioned their confidence and enthusiasm in their work has dropped. Additionally, these workers have left regions where they had established friendships and were part of the local community (for some up to 13 years). The relocation has made many of them feel isolated. Being unable to meet people due to social distancing restrictions has contributed to their isolation.

For many participating in seasonal worker programs it has become a way of life. Most know they can return for consecutive seasons. However, the impact of COVID-19 on border restrictions and future opportunities to participate has forced workers to reconsider their goals. After leaving quarantine in Vanuatu in July, a returned RSE worker messaged saying: “As we are going through the crises of COVID-19, I am starting to invest in a small chicken and poultry farm. I bought 100 chicks today to start off.” He is one of many to convey this, and team leaders have commented: “Workers are thinking of new ideas and plans for their future.” But much of this depends on how much workers have saved from this season. Reports that workers have lived off their savings during COVID-19 and downtimes with fewer hours has made many workers re-evaluate the cost-benefits of these schemes.

The pandemic has revealed issues within these schemes and provided various opportunities to rethink goals and participation. There will be questions that employers and workers and their families will be considering long term. As more than one worker expressed, “It’s a lot to risk for small money.” For employers, they have much more at stake with the future of an uncertain labour force. Yet as most employers have noted, the inflexibility of these schemes can also be a deterrent and the time taken in applying for workers and getting them on the ground will impact the future of their businesses severely.

These experiences highlight that more work is required in addressing both worker and employer welfare measures in these programs. Finding a favourable balance will assist in building confidence in the scheme and future uptakes.

----------
This article appeared first on Devpolicy Blog (devpolicy.org), from the Development Policy Centre at The Australian National University. It is part of the #COVID-19 and the Pacific series.