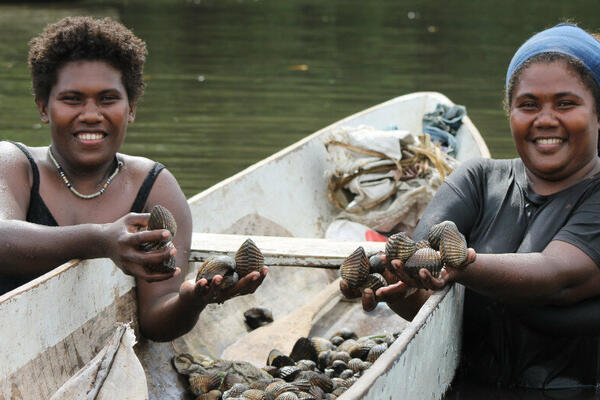 Women from Solomon Islands smile as they hold up clams. A new study says that well-being of South Pacific islanders remained steady despite the drop in tourism.
Source: WorldFish / flickr.com
Share
Friday, 17 September 2021 09:17 AM

Although COVID-19 lockdowns severely affected the financial wellbeing of people dependent on tourism, the social, mental and physical well-being of South Pacific islanders living in the region's main tourist destinations actually showed improvements, according to a study.

The United Nations Conference on Trade and Development (UNCTAD) estimates that the drop in international arrivals caused a loss of up to US$2.4 trillion in GDP in 2020 and that it is possible that a similar loss will occur again this year.

The study, published in the Journal of Sustainable Tourism, surveyed people in Samoa, Vanuatu, Solomon Islands, Cook Islands and Fiji—countries that rely on tourism for between 12.5 and 87 percent of their GDP, according to the South Pacific Tourism Organisation.

Regina Scheyvens, lead author of the study and co-director of the Pacific Research and Policy Centre at Massey University, New Zealand tells SciDev.Net: "We wanted to know what Pacific populations did to adapt since the shutdown due to pandemic and what they are doing to support each other.

"But we also wanted to know what could be done to support them, in terms of governments' approaches, donors, NGOs and in terms of what private tourism businesses themselves could do."

The study showed that 73 percent of people surveyed had experienced a major financial hit. The results were mixed for social, mental and physical well-being with 15 percent considering themselves to be strongly affected while an equal proportion said they were the better for it. On physical well-being, more than 14 percent of respondents said they felt better against only nine percent saying they were adversely affected.

Tourism revenue accounts for 87 percent of GDP in the Solomon Islands, 46 percent in Vanuatu and 39 percent in Fiji. "Fijian economy suffered a US$2 billion loss in GDP because of the once-in-a-century COVID pandemic," said Aiyaz Sayed-Khaiyum, Fiji minister for economy.

Customary systems appear to have been a major support and this included land to which people returned in order to feed themselves and support others in urban areas. Some are able to go back to fishing because traditional knowledge from the older generation have been effectively passed on.

"It changed my life coming home—I looked around, went to church, and saw people. Went back to the community, you see the people…They are very happy not like before—the stress, the dollar sign," said a resort worker from the Cook Islands who was interviewed for the study.

"I am very happy to be back into my Vanua (land)," Maïka tells SciDev.Net. The former worker in a Suva hotel who returned to Kadavu rural island due to the pandemic said he felt useful growing his own crops and sending vegetables to family members living in the city.

Pacific people experienced the return to their home in a spiritual way as well, says Scheyvens. "They value time—time with family, time to grow, and even spiritual time, such as church obligations. They even eat better food because they eat what they grow," explains Scheyvens.

The findings clearly show that increased religious practice, time with family, and deeper connections to ancestral lands, led to improvements in mental, social, and physical well-being.

Previous studies had already shown that the well-being of Pacific people were linked to social, mental, physical and spiritual factors and some small island developing states in the region have started to integrate these in their health policies.

In Vanuatu, the National Sustainable Development Plan 2016–2030 aims for "a healthy population that enjoys a high quality of physical, mental, spiritual and social well-being."

"In implementing this strategy, WHO and the Ministry of Health will work with other government ministries, other sectors, academia, civil society, other UN agencies, bilateral development partners, regional and global health initiatives, philanthropic foundations and others in support of planned national health priorities," the WHO Western Pacific Region office declared in its Country Cooperation Strategy 2018–2022 for Vanuatu.

While a return to business as usual in the Pacific small island developing states will bring financial benefits for many, working practices need reviewing, according to Scheyvens. "A lot of people in the Pacific working in tourism would be a lot happier if they had better terms and conditions and a permanent job—but working part-time would mean they have more time for their family and the garden," she says.

Well before the pandemic, scientists had warned that diversifying the economies of small and developing states rather than depending on any one source like tourism was important for sustainable development.

"As for building tourism back better, planning and consideration must be done respectfully and be centered around the well-being of destination communities in general," says Scheyvens.