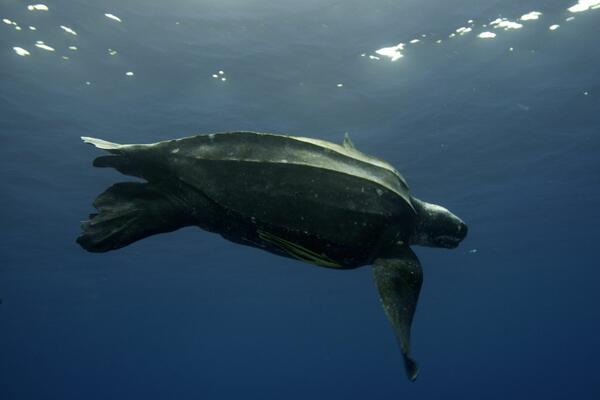 “We're fighting against extinction at this point” Kelly adds. “But there’s still hope and enough turtles, we believe, that the western Pacific leatherback population can recover. We haven't hit the tipping point, yet.”
Source: The Nature Conservancy
Share
Wednesday, 22 June 2022 14:00 PM

Sasakolo beach looks like any other in the South Pacific: a strip of sand buttressed by coconut palms, low green hill rising in the distance.

Located near Kafulapu community, this unassuming patch of land is one of the most important—and perhaps the largest—leatherback nesting beaches in the South Pacific.

From October through February each year, a dozen or so turtles emerge from the waves each night, hauling themselves scooch by scooch up the beach. They measure up to 6.5 feet long and weigh up to 1,300 pounds, dwarfing the rangers that look on from a distance.

Leatherbacks, like many other turtles, are long-distance ocean travelers. The same turtles that can be seen by divers off the coast of southern California cross the width of the Pacific Ocean to nest on the narrow, palm-fringed beaches of the Solomon Islands.

A Last Chance for Leatherbacks

While the species is considered vulnerable at a global level, the subpopulation in the Western Pacific are faring far worse than others. Scientists estimate that this population has declined to just 1,400 breeding adults, leaving them critically endangered.

Without action, it will continue to get worse. By 2040 years, scientists predict that the Western Pacific subpopulation will be whittled down to just 100 nesting pairs each year. “They’re crashing hard, and it’s going to continue unless we arrest the decline,” says Peter Waldie, a fisheries scientist with The Nature Conservancy (TNC).

But conservationists can’t protect these turtles without data: where, when and how often they nest, how many hatchlings clamber from sand to sea and how many nests are washed away by rising tides.

TNC is partnering with the Solomon Islands government to start gathering these data from critical nesting beaches in Isabel Province, with funding from the US National Oceanic and Atmospheric Administration (NOAA).

In late 2021, TNC-trained rangers resumed monitoring at Sasakolo for the first time in more than 10 years. And, in a first for the Solomon Islands, women rangers will now join the monitoring program.

Breaking Barriers to Save a Species

Strict gender roles dictate much of Melanesian culture. “There are specific jobs for men and women, which creates a balance in communities,” explains Madlyn Ero, who leads TNC’s gender equity work in the Solomon Islands. “And most of the time the roles that women play are domestic, they are in the house with children, cooking and other domestic-type work in the village.”

Meanwhile, men dominate jobs that require technical expertise and make the majority of the decisions for family and community. Ero explains that getting women to attend meetings about conservation or natural resource management can be difficult, even when those decisions impact their lives on a daily basis.

“Unless you specifically require women to attend, only men will turn up,” she says.

But as conservation organizations like TNC build gender equity requirements into their work, the tide is slowly shifting.

“There has been a lot of progress with several women’s organizations coming in and talking to communities about getting women into decision making,” says Ero, “so people are hearing about these changes.”

Five women attended TNC’s turtle ranger training in November, and three of those women are now working at Sasakolo. Ero says that all three women showed up on the first patrol—even though they weren’t scheduled to work that evening—to shadow more experienced rangers and continue learning.

By far the biggest challenge, though, is convincing men in the community to accept that women are capable of the work. “We have to work hard to change how men think, so they realize for themselves that women can do this work,” says Ero. "Usually, they need to see it to believe it."

Ero and her colleagues are consulting with the community to learn what else they can do to facilitate more female rangers to join. The goal is to build the program to a 50/50 gender parity. To get there, Ero says they will need to take into account the women’s safety, figure out ways to help offset domestic duties while women are working and build a separate family-friendly facility so women can bring their children and partners with them while they work.

Long Nights on the Beach

Work as a ranger means long nights walking the beach by torchlight, searching for the tell-tale signs of a nesting turtle: tire-like tracks up and down the beach, or a very large, dark lump of heaving, snorting, salt-covered turtle in the dark.

When they find a female, the rangers wait patiently while she digs a hole in the sand and lays her clutch of eggs. If they get the timing right, rangers can count the number of eggs in the nest as they drop from her cloaca. Then they mark the location, before gathering data about the female turtle and attaching a small metal identification tag to her flipper.

Rangers on these patrols also check the older nests, looking for signs of hatching or disturbance. Solomons Islanders can legally harvest turtle eggs for food, and many nests are predated by people.

Eventually, Waldie and his collaborators at NOAA hope to incorporate satellite tagging at Sasakolo to learn where these turtles travel during their non-breeding years. Similar research from the Arnavon Islands, a significant hawksbill nesting site nearby, discovered that those turtles migrated as far as Australia’s Great Barrier Reef.

All of this data will feed back to TNC and NOAA, who will use Sasakolo as an “index beach” to better understand what is happening to the Western Pacific subpopulation.

“The tricky thing with turtles is that they are a very long-lived species, so you need long-term data for 9 to 10 years to really understand a population's nesting trend,” says Irene Kelly, NOAA’s sea turtle recovery coordinator for the Pacific Islands.

She says that most of the data on the Western Pacific sub-population comes out of Indonesia, with very little data available from Papua New Guinea and the Solomon Islands.

“The West Pacific leatherback turtle population is a difficult one to study because nesting areas are so remote and logistically challenging to access,” she says. “But the more we look, the more we learn.”

Data on how often females return to nest, the number of nests laid and hatchling survival rates will all feed into NOAA’s population models and status assessments.

Those, in turn, will help the agency better protect leatherbacks by refining management measures to mitigate interactions between turtles and US commercial longline fisheries. They will also inform NOAA’s work with international governments and partners to help conserve the species.

Kelly emphasizes that, at the end of the day, NOAA alone can’t save the western Pacific leatherbacks. “We need and rely on partnerships,” she says. “We don't want to just collect the data and leave, that’s not sustainable or realistic. We need to engage with communities and local partners to build capacity, so they have ownership over the project, which builds longevity.”

“We're fighting against extinction at this point” Kelly adds. “But there’s still hope and enough turtles, we believe, that the western Pacific leatherback population can recover. We haven't hit the tipping point, yet.”

And that’s exactly what TNC and the community as Sasakolo are doing: fighting against extinction, one turtle at a time.