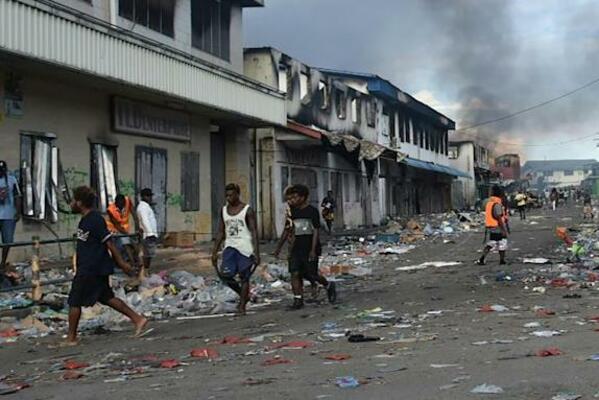 66% of respondents thought their country was heading in the wrong direction. Only 18% said it was going in the right direction. Solomon Islanders aren’t the only people to be negative about their future, but a figure of 18% does put them at the pessimistic end of the international spectrum.
Source: File
By Stephen Howes
Share
Friday, 03 December 2021 12:45 PM

The riots in Solomon Islands last week have thrust the small Pacific country into the international spotlight. What is their cause?

A useful source is the public opinion survey conducted by the survey firm Tebbutt Research in April and May of this year on behalf of an international NGO, the National Democratic Institute, with funding from USAID. Tebbutt surveyed 1,249 randomly selected Solomon Islanders by phone, using local interviewers, in English and Solomon Island Pidgin. (According to the report, mobile phone penetration in Solomon Islands is 77%, and the survey had a response rate of 62%. Quotas based on province, gender and age were used.)

A lot of the questions were about COVID-19, and those responses have already been analysed on this Blog. Given what has just happened, the more general questions are now of greater interest.

To start with the most general, 66% of respondents thought their country was heading in the wrong direction. Only 18% said it was going in the right direction. Solomon Islanders aren’t the only people to be negative about their future, but a figure of 18% does put them at the pessimistic end of the international spectrum.

Respondents were also asked whether things were getting better or worse in relation to a number of specific issues. Corruption and unemployment headed the list of concerns, with “getting worse” responses exceeding 90%, followed by land, cost of living, and violence against women, where such responses exceeded 80%. Access to basic services and schooling were the only areas where as many people felt things were getting better as they did getting worse.

People were asked about the most important issues for government to address. Unemployment was the most popular response (36%), followed by cost of living (27%) and corruption (26%). Climate change didn’t rate.

There were quite a few questions about corruption. 70% of respondents thought the government was doing a poor or not so good job fighting corruption.

A lot has been made of ethnic or inter-island tension in Solomon Islands, especially between those from Malaita and those from Guadalcanal, the country’s two most populous islands. Some of the results are broken down by province and they look quite similar. 73% of Malaitans think the country is going in the wrong direction, slightly more than the 68% of those from Guadalcanal. But concerns around corruption were higher in Guadalcanal.

The responses certainly point to some deep-seated unhappiness. If the three problems identified as the most serious (unemployment, cost of living, corruption) are also ones that nearly everyone (almost or more than 90% of the people) thinks are getting worse, that is surely a recipe for frustration and anger - and perhaps violence, if the biggest of those problems is a lack of jobs. If people also identify the government as part of the problem – with parliament rated as the second most corrupt institution in the country, behind only the MP funding scheme – it seems hardly surprising that there was unrest in the nation’s capital.

This article appeared first on Devpolicy Blog, from the Development Policy Centre at The Australian National University. For a full copy of the NDI research see the hyperlink on this story at devpolicy.org.