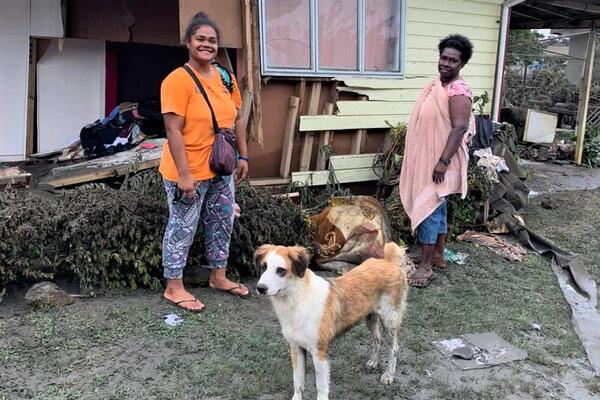 Gwenda said she was thankful to be alive despite losing everything. She said the support from the SDA Mission, her work colleagues, friends, Solomon Island families in Tonga, church members and the Tongan government was well received by her.
Source: Supplied
By Georgina Kekea
Share
Wednesday, 09 February 2022 11:01 AM

It was just another Sabbath day for Gwenda Voho on Saturday 15 January 2022 when the Hunga-Tonga-Hunga Ha’apai volcano erupted in the Kingdom of Tonga.

Gwenda comes from Veramogho village in South Guadalcanal in the Solomon Islands. She is a missionary from the Seventh Day Adventist Church and has been in Tonga for more than three years now.

A primary teacher by profession, Gwenda retells her ordeal of the events that unfolded when the volcano erupted and how she escaped.

"Within 4minutes the water level rose higher above the seawall and started flooding inland. Since our compound is just a few steps away from the sea, the water quickly rose and covered the whole compound within seconds”, Gwenda said.

The compound that Gwenda resided in was directly in sight of the volcanic island.

Though there were warnings issued earlier in the week, on Friday night however the warning was cancelled. Gwenda was at home with her colleague from Fiji when the volcano erupted.

“There was only one gate to exit the compound, and it was facing the seafront. There were two doubled storey houses in the compound.The gate and the fences around us started to fall when the sea came in. We ran towards the office building and went upstairs on the second floor. We stood there and watched all the destruction that the sea did around us.

"We were upstairs for 15 minutes. By this time the compound was fully covered. Then we both decide that we must leave before more waves will come. We rushed down the stairs, locked our arms together and waded out into the water, against the current which was so tough and scary.

"As the current got stronger, we stood firm and waited for it to pass. We continued to swim against the current till we reached the open broken fence (where we get hurt from trying to climb) We finally got out of the compound and ran along the flooded road. We ran inland and saw more water coming from the other roads," Gwenda recalls.

“A worker in that building saw us and told us to hurry and get in the house. Still gasping for air, the man told us to sit down and rest”.

Gwenda said by that time, their Adventist Pastor, Fanueli Mataele was trying to get in touch with them but to no avail.

“He had to travel from the eastern part of the island to reach us. He took all shortcuts, as the volcanic ashes fell heavier and the traffic jam was terrible. He reached us just in time”.

Gwenda said they later accompanied the Pastor to his place where they spent the night.

“The next morning on Sunday 16th of January the Pastor suggested if we could go and visit our compound. So we went along with his family. Along the way, we saw destruction along the shorelines of Nuku’alofa. Big rocks were tossed everywhere on land. It was not a good sight at all.

"Upon arrival at the compound we were dumbfounded and shocked by what we saw. No words were exchanged, only silence was felt. Our house was totally destroyed by the sea. All our belongings were gone, I felt so discouraged and all I could think of was that I needed to go back home. It struck me really hard, I just stood there and stared around the compound”.

Gwenda said she was thankful to be alive despite losing everything. She said the support from the SDA Mission, her work colleagues, friends, Solomon Island families in Tonga, church members and the Tongan government was well received by her.

She said she was able to communicate with her family in Solomon Islands a week after the disaster.

“All I can say now is I thank God for saving my life. This experience will never be forgotten. Being a foreigner in another country and having gone through this tough experience is so emotional. I had so many things clouding my mind. I didn't even know what to do and I felt so helpless and going home was all I needed. Finally, what kept me going right now is living one day at a time. I tell myself that I must not give in. I really appreciate the help and support given to me. Thank you so much to those who were there for me”.

The Solomon Islands government has not issued any official statement yet regarding Solomon Islanders affected from the volcanic eruptions in Tonga.

“Usually nationals in need contact via Tonga National Disaster Council (NDC) to our NDC or through our Mission in Suva or Wellington or their relatives in Honiara”, Permanent Secretary in the MInistry of Foregin Affairs and External Trade, Mr. Collin Beck said.

“Immediate assistance is normally covered by the host country”, he adds.

Tonga since the event of the volcanic eruptions are now also faced with the challenge of curbing the spread of COVID-19 since community transmission of the virus was also detected recently.