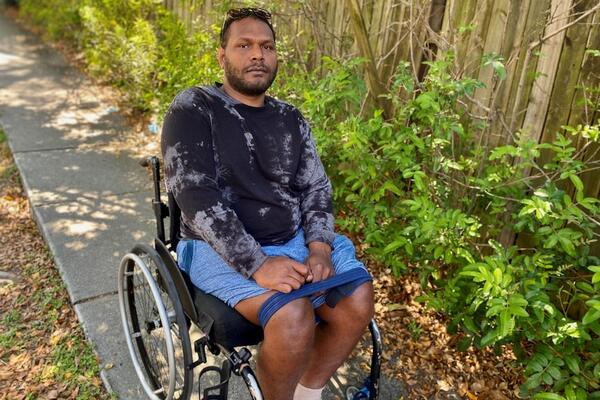 Solomon Islands resident Eric Vavaki was paralysed in a crash in Queensland but is facing deportation because he has no income or place to live.
Source: ABC
Share
Thursday, 06 October 2022 11:08 AM

Solomon Islands man Eric Vavaki worked so hard on fishing trawlers off the Queensland coast, there was no point in having a permanent home on land.

For four years he worked as a deckhand on trawlers — often the only worker beside the skipper — with dreams of becoming a permanent resident.

But his life changed in February when he was the passenger of a car involved in a serious crash in Toogoolawah, in the Somerset Region of south-east Queensland, that caused the lower part of his body to be paralysed.

He has since spent seven months rehabilitating in Brisbane's Princess Alexandra Hospital.

While he is eligible for the National Injury Insurance Scheme Queensland (NIISQ), which is designed to assist people seriously injured in motor accidents, the scheme will not cover rent until he is well again.

Unable to work and with nowhere to live, Mr Vavaki faces the possibility of being deported after discharge from hospital, which is scheduled for tomorrow.

Facing an inaccessible home and limited access to rehabilitation in the Solomons, he has pleaded with authorities to let him stay in Australia.

Mr Vavaki said one of the hardest things about adjusting to life using a wheelchair has been asking for help to be pushed uphill.

"It makes me feel a little bit ... sad. Like, everything changes," he said.

He said when he regained consciousness after the crash, his first thought was about what his injury would mean for his future in Australia.

"Am I able to do my career again or not? What's my life going to look like?"

Mr Vavaki said while he has family and friends in Brisbane, he cannot live with them as they rent inaccessible housing.

He hopes to live alone while he retrains to work in an accessible role in the fisheries sector.

He said his client is someone who has paid taxes for years and should not be left without shelter by the publicly funded scheme that is designed to protect people in his situation.

"This guy has been here for years working really hard in a field where there's not a whole lot of people who are willing to do this sort of really tough work, and he's done it with a smile on his face," he said.

"I don't think that sits well, that someone who's contributed to this sort of scheme isn't benefiting from it."

Calls for scheme to cover rent

The NIISQ is funded by Queenslanders through a levy associated with Compulsory Third Party premiums and vehicle registration.

It steps in to provide treatment, care and support to people who have sustained life-changing injuries through motor vehicle incidents.

It provides funding for rehab and medical services, as well as aids, respite, training, home modification, care and transport.

Mr Whealey said that needs to also include rent.

"What we really want is for there to be some discussion, and ultimately acceptance around the fact that without a roof over his head, he's not being treated … cared for or supported," he said.

"Without shelter, without food, how can we fulfil these other goals of the act?"

Last week Mr Vavaki was granted a bridging visa, while the Department of Home Affairs considers his application for a substantive visa.

A Home Affairs spokesman said in a statement the department would not initiate deportation while that process is ongoing.

But Mr Vavaki is still due to be discharged from hospital tomorrow, with nowhere to go.

"[He needs] someone to step up to the plate and say, 'OK, this man deserves another shot and he deserves a chance to find a new path for himself'."

In a statement an NIISQ spokesperson said it "cannot discuss the personal circumstances of any participant".

However the spokesperson said the body "prioritises the care and support for all of our scheme participants and will continue to work collaboratively with all relevant stakeholders in this particular matter".