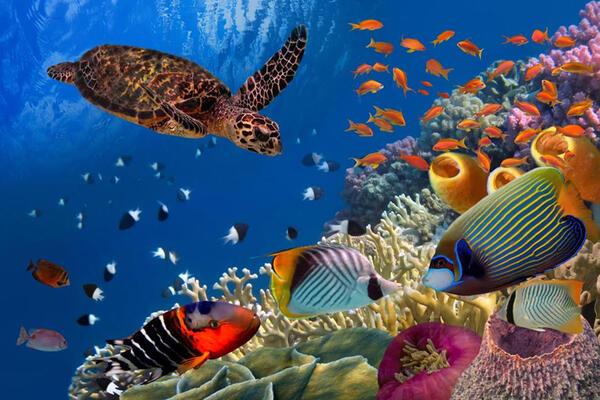 Detailing another legal approach, Silas Bule Melve, Minister for Climate Change of Vanuatu, pointed out that his country — as part of a coalition — is planning to ask the International Court of Justice for an advisory opinion on how existing international law contains protections for the oceans.
Source: CLME+Hub
Share
Thursday, 30 June 2022 09:05 AM

The 2022 United Nations Conference to Support the Implementation of Sustainable Development Goal 14: Conserve and Sustainably Use the Oceans, Seas and Marine Resources for Sustainable Development entered its second day, bringing together representatives of Government as well as civil society in a range of conversations, from a high-level plenary to multi-stakeholder dialogues.

Flavien Joubert, Minister for Agriculture, Climate Change and Environment of the Seychelles, pointed out that the world is grappling with “giants” such as marine pollution and climate change and stressed that his country’s survival is linked to the health of the ocean. This matter concerns all States — big or small — and global initiatives, like the Ocean Conference, provide important platforms with which to advocate for change and communicate a collective aspiration for a better future. A small number of dedicated leaders can turn the tide in the fight against threats to the oceans, he added.

Jorge Lopes Bom Jesus, Prime Minister of São Tomé and Príncipe, echoed that sentiment, emphasizing that the Ocean Conference provides a good opportunity for his country to reach out to bilateral and multilateral partners. Advocacy is a vital part of the Government’s strategy to move forward on its transition to a sustainable blue economy, and he said that this paradigm shift requires a decisive strategic choice, new investments and the sharing of expertise.

On that point, Siaosi ‘Ofakivahafolau Sovaleni, Prime Minister of Tonga, stressed that partnership is crucial for the success of sustainability initiatives, calling for a collective effort to assist his country with financing, technology transfer and capacity-building. He also urged the international community to support sustainable blue economies and negotiate instruments to address plastic pollution and protect marine biodiversity in areas beyond national jurisdiction.

José Ulisses Correia e Silva, Prime Minister of Cabo Verde, similarly emphasized the need for standards and binding legal rules that express global commitments and ultimately lead to a universal declaration of ocean rights. Small island developing States are much more sea than land, and therefore are highly vulnerable to climate change and external impacts, he said, calling for strong engagement on climate finance and partnerships in innovation, science and technology.

Vivian Balakrishnan, Minister for Foreign Affairs of Singapore, also urged that the conservation and sustainable use of the ocean be conducted under the aegis of international law, and that efforts in this area be based on science and data. He pointed out that his country serves as President of the Intergovernmental Conference tasked with negotiating an international legally binding instrument on the conservation and sustainable use of marine biological diversity in areas beyond national jurisdiction, and called on delegations to rapidly conclude an ambitious, future-proof treaty.

Detailing another legal approach, Silas Bule Melve, Minister for Climate Change of Vanuatu, pointed out that his country — as part of a coalition — is planning to ask the International Court of Justice for an advisory opinion on how existing international law contains protections for the oceans. The aim is not to assign blame, he said, but to find a path to bolster ambitious climate action, as the extractive focus of colonial aspirations has led to current political, economic and environmental disasters.

Kay Rala Xanana Gusmao, Minister for Planning and Strategic Investment of Timor-Leste, stressed that the 1982 United Nations Convention on the Law of the Sea is essential for good governance of the ocean, as “areas without governance are areas where uncertainty breeds”. He said that the Government has recently succeeded in delimiting permanent maritime boundaries with Australia and is currently working with Indonesia to achieve the same. He also pointed out that, while not all are equally responsible for the pressure put on nature, all will suffer from it and, cruelly, those who live in greatest harmony with nature often will be the first victims.

John Briceño, Prime Minister of Belize, spotlighting the “huge disconnect” between words and actions to address the climate crisis, pointed out that — while Belize is doing its part to protect the ocean — its efforts, like those of most small island developing States, have been constrained by a lack of financing. While his country has demonstrated leadership in reducing emissions and protecting coastal areas, he stressed that “we demand action from those who have put us in this position”.
Steffi Lemke, Minister for the Environment, Nature Conservation, Nuclear Safety and Consumer Protection of Germany, expressing concern about the “overheated, acidified, overfished, overused and polluted” state of the ocean, highlighted the Group of Seven (G7) environment ministers’ “Ocean Deal” adopted at the end of May. This measure provides an urgently needed framework for future protective efforts, and she further noted the G7’s commitment to start addressing plastic pollution now, rather than waiting for an international convention.

In that vein, Jitendra Singh, Minister for Earth Sciences of India, joined other speakers in detailing national plans to ban single-use plastics, which his country plans to do. Efforts are already under way to phase out plastic and polyethylene bags and promote alternatives, such as bags made from cotton or jute. He added that the Government has proposed creating a sustainable coastal and ocean research institute to meet the needs and aspirations of Pacific island countries.
David Parker, Minister for Oceans and Fisheries of New Zealand, pointed out that his country has spent over NZ$68.5 million on ocean priorities since 2018, and even more on core funding to regional agencies that are integral for helping Pacific island countries protect the ocean. He also spotlighted his country’s world-leading fisheries management system and its prioritization of protecting threatened species.

John Kerry, Special Presidential Envoy for Climate of the United States, called on the international community to maintain the momentum of the Our Ocean Conference, held two months ago in Palau, where more than 400 commitments — valued at over $16 billion — were made. He also encouraged countries and other stakeholders to join the Illegal, Unreported and Unregulated Fishing Action Alliance, stressing that the ocean’s problems are human-induced and are therefore subject to human solutions.