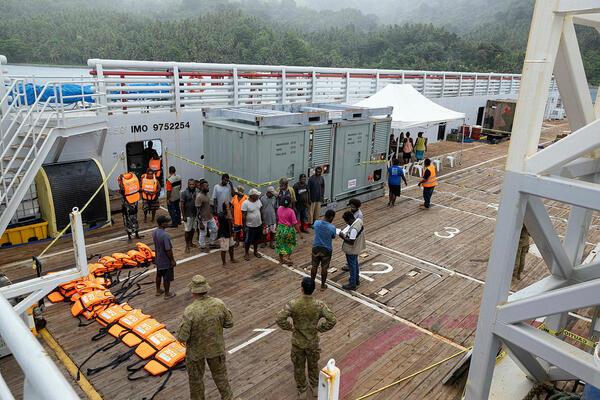 Reliant participated in Exercise Longreach, an exercise developed jointly by Australia and Solomon Islands. The exercise simulated a mass evacuation of residents from the volcanic Savo Island off the coast of Honiara to test the disaster management plans of the Solomon Islands National Disaster Management Office (NDMO).

NDMO deputy director George Baragamu said Reliant offered a “unique capability” to not only evacuate people, but to transport humanitarian supplies and teams.

To move people to the ship during the exercise, Reliant utilised two embarked landing craft vehicle and personnel boats crewed by Navy personnel, and three Zodiacs operated by a team from Army’s 2nd Battalion, the Royal Australian Regiment.

Reliant aims to spend up to 300 days a year in the Pacific, supporting regional priorities including training and humanitarian assistance and disaster response guided by the needs of Pacific partners.

Savo Island was chosen by the Solomon Islands NDMO to test the country’s disaster management preparations after seismic and volcanic activity was detected on the island.

“Through these exercises, we’re able to enhance our relationships with those agencies and, in turn, they are also able to test and refine their own disaster management plans and enhance their readiness and coordination with partners,” Major Bulow said.

Representatives from the Australian High Commission and the Red Cross, which supported the evacuees on-board Reliant, also took part in the exercise.

Sophia Kidoe, program manager for aid co-ordination at the Australian High Commission, said being a part of the exercise helped participants to understand the requirements should a volcano erupt.

“When a humanitarian crisis happens, Australia is an important regional partner and has frequently demonstrated its willingness to provide assistance when asked,” Kidoe said.

“It’s good to be in the ship as well. There’s been a lot of talk around town since Reliant arrived and everyone is excited to see this ship.”