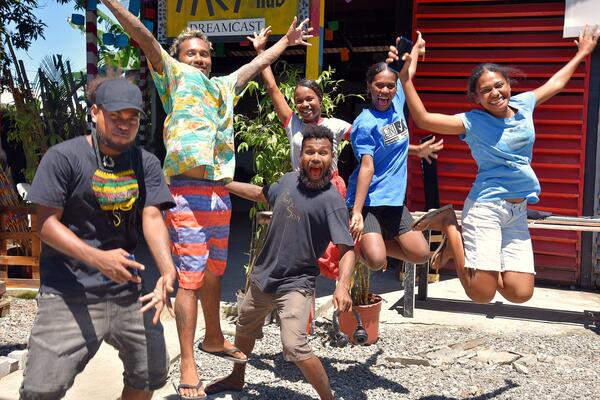 Natalina Hong, SICCI’s Chief Executive Officer remarked that, “We have received encouraging feedback from the businesses who have attested that the campaign has brought their services more recognition."
Source: SICCI
Share
Thursday, 06 January 2022 13:17 PM

The ‘Influen-shell’ social media campaign promoting local businesses, which was developed in partnership between Meta (formerly Facebook) and the Solomon Islands Chamber of Commerce and Industry, has successfully concluded its initial run.

The campaign aimed to promote local businesses in the Solomon Islands through the sharing of intimate stories of growth, resilience and connectedness, particularly with their use of digital technology. It celebrated Solomon Islands local enterprises and their employees, and showcased their diversity, adaptability, and innovation.

Over the five weeks from 15th November to 24th December 2021, the campaign highlighted 15 Solomon Islands businesses on social media, sharing inspiring stories, vivid images and short videos from large, well-established organisations, through to small businesses that are just at the start of their journey. Many of the businesses that participated in the campaign noted a significant and positive increase in their customer base and brand awareness.

Natalina Hong, SICCI’s Chief Executive Officer remarked that, “We have received encouraging feedback from the businesses who have attested that the campaign has brought their services more recognition. It was also great to see such positive and motivating comments from the general public on the business stories that were published on the Influen-shell Facebook page.”

Timo Kenasi of Teekay Barber shared, “I am so grateful to be part of the Influen-shell campaign and sharing my story with the other bigger businesses here in Honiara. Being selected to join the campaign was an honor for me as a young entrepreneur and it was an achievement that I would never have dreamed of. I started to experience a high turnout of clients in a number of days after my story was published with more people appreciating what I do. The Influen-shell campaign has truly transformed my business and it gives me courage to keep growing and to face whatever challenges that may come.”

Bob Pollard, Kokonut Pacific Solomon Islands’ Managing Director noted, “It is difficult to say precisely how much the Influen-shell campaign has impacted our business but certainly it has been positive. For us, getting people to understand the story and the people behind the great products is really important and we get great comments and feedback.

"The campaign has complemented well with our other social media and publicity. We find that it’s like putting together a jigsaw, the more pieces, the fuller the picture. It’s been a privilege to be part of a campaign which has highlighted so many other great local businesses too.”

Joyce Lelau, Solomon Islands Professional Driver Training Services’ Managing Director emphasized that “Being part of the Influen-shell campaign has been amazing in many ways. It was an eye-opener for individuals and organisations who just came to know about our driving school that is located in Honiara.

"The campaign brought more recognition to SIPDTS, and we are anticipating an increase to our customer base. SICCI is a genuine body and people know that we are affiliated with a registered body representing private businesses in the Solomon Islands.”

Sonya Rechenberg of Sons & Daughters explained, “Since joining and being a part of the Influen-shell campaign, I have seen a significant change in my small business. It has not only gained me more recognition but it has also helped Sons & Daughters to be more sought out for tie-dye products in Honiara and out in the provinces too.

"I would also like to thank SICCI, Webmedia, Facebook and the Influen-shell campaign for this amazing opportunity. You have all greatly contributed in helping me achieve my business goals, and have given me the inspiration and drive to achieve even more! I am both thankful and blessed!”

Eunice Philip of Unice Photography commended that, “The Influen-shell campaign has been a great opportunity, especially for a little business like mine. I get to network with individuals who are also on the grind like me in their own respective business genre! It’s amazing and empowering to know there are youths who are involved in this campaign!

"I’ve always been doing this business by myself, trying to thrive in trying times and to be chosen shows that hard work really does pay off and I’m just getting started.

"I pray and hope that there will be more great initiatives coming out for small businesses that help with their growth!”

Bernard Kemakeza, Savo Sunset Lodge’s Managing Director said that, “Influen-shell had such a huge impact on our promotion. Overseas customers have already indicated that they would like to come over and spend a month of holiday with us here on the island when the borders open.”