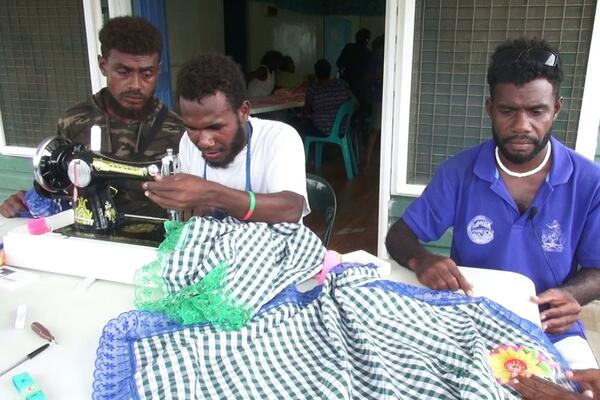 Henry, Rex and Patterson at the sewing class facilitated by the Guadalcanal Provincial Council of Women.
Source: Georgina Kekea
By Georgina Kekea
Share
Wednesday, 29 April 2020 09:24 AM

“Why I attended this session is because I just want to learn some new things in life skills”, Henry Vagi said.

Henry resides in the outskirts of Honiara. Last week he was part of a selected group of participants in a sewing class hosted by the Guadalcanal Council of Women.

This session targets settlers in the outskirts of Honiara, directly affected by the State of Public Emergency.

Most of the settlers are vendors, often doing roadside sales. Since the State of Public Emergency, Honiara was declared an emergency zone.

The emergency zone stretches from Poha in the West to Alligator Creek in the East.

Within the emergency zone, no one is allowed to sell along the streets or in public spaces. This is to minimize large public gatherings.

Because of this, the settlers are now without income earning activities. To get their products to the Honiara Central Market is quite expensive and most of all, they are scared of the coronavirus.

“Rather than staying at home, doing nothing, I decided to join this class so that I can learn how to sew”, Vagi said.

The Guadalcanal Provincial Council of Women (GPCW) through funds from ‘Commonwealth of Learning’ based in Canada, were able to host a series of life skills training for settlers from both east and western end of Honiara.

The training on Business Entrepreneurship focuses on sewing, cooking and financial management. For Vagi, the session he attended is sewing.

“I learned how to sew a table cover,” he said.

Vagi currently resides with his mother East of Honiara. With no nuclear family as yet, he said this is an opportune time for him to learn something new.

He said he does not find it odd at all to learn how to sew.

“If women and girls can do it, then we boys can do it too”, he said.

Patterson Bulolo is another bloke attending the same sewing class. He resides at Tasahe.

“I am a student at SINU, undertaking a Diploma in Youth Development”, he said.

Patterson said since class has been postponed to August, he just cannot sit by and do nothing.

“I have to do something to make a living”, he said.

“I am learning to sew so that I can sell my products and do something while waiting for classes to resume”, Patterson said.

Rex Nafo is another bloke learning to sew.

“This is my first time using a sewing machine. I am making a food cover”, he said.

Women are the majority in the sewing class. This does not deter the blokes from participating.

“The women are very helpful. When we make mistakes, they correct us nicely”, the blokes said.

Meanwhile President of GPCW, Alice Hou said they are thankful to Commonwealth of Learning for the grant that enabled them to carry out the training.

She said since making an announcement and banning vendors from selling products in public spaces, there has been no support rendered to these people by the government.

“These people are residents in the emergency zone. When the government stopped them from carrying out their income earning activities, they have not provided any alternative for them to make a living. These are settlers and most of them do not own land here. They cannot go back to their home villages too because they have nothing in their home villages”, Alice said.

She said the training carried out for the settlers will instill some form of life saving skills for the participants who are members of communities.

“Just to prepare them in the event of a lockdown. They can sew their own clothes or even sell their products to earn an income”, Alice said.

Their second training was held at the GPCW center in Henderson.

A SBD$5000 startup fund was also provided for participants to apply for.

This is to assist communities needing financial assistance to start a business.

The funds are expected to be repaid to the GPCW so that it can be utilised to help other communities with the same need.

A COVID-19 awareness was also carried for participants in the three day session.