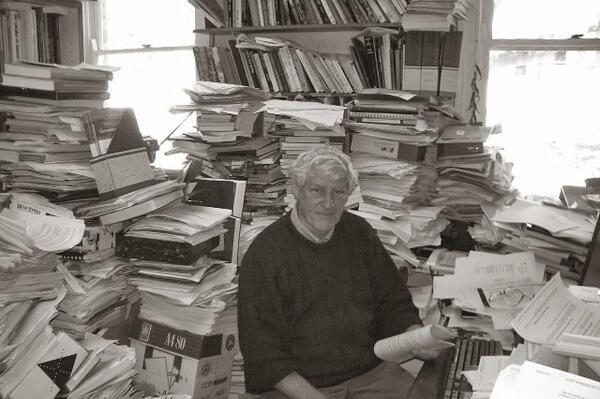 Mr. May was one of the forces behind the establishment of State, Society and Governance in Melanesia, now the Department of Pacific Affairs.
Source: Supplied
By Ronald J. May
Share
Monday, 04 October 2021 09:17 AM

Ron May has spent more than 50 years working in and on Papua New Guinea, including 32 years at The Australian National University (ANU), where he was one of the forces behind the establishment of State, Society and Governance in Melanesia, now the Department of Pacific Affairs.

Today is the second day of a two-day conference being held in his honour. In this article, Ron outlines the origins of his long engagement with Papua New Guinea.

In my last year at Sydney High School (1956) I did quite well in the New South Wales (NSW) Leaving Certificate exams, topping the state in economics.

Someone in the local Commonwealth Bank branch who saw my results asked what I intended to do; I said I guessed I’d do economics at the University Sydney and maybe join the Commonwealth Bank’s Central Banking Division one day. (At one stage I had vaguely thought of going to Papua New Guinea as a patrol officer, following in the footsteps of Sydney High old boy Freddie Kaad.)

A day or two later I got a call from the Central Banking Division offering to take me into their research section (as a ‘general classification clerk’, working five and a half days a week on a salary of around 480 pounds a year); I would go to university at night (five nights a week) and if I did well enough at the end of the year they would send me to university full time, on salary (though I had to work in the bank during vacations). I decided to accept this, and after a pretty demanding first year (followed by three months National Service in the army) I spent the next three years as a full-time student.

Graduating in 1960 with honours in both economics and government and a university medal in the latter, I was offered a University of Sydney post-graduate scholarship, which the Reserve Bank of Australia (RBA) – as the Central Banking Division had become, under that Australian, Dr H.C. ‘Nugget’ Coombs – generously gave me leave to accept. Some time around then, too, I was elevated out of the general classification clerk status. Shortly after I took up the scholarship, and was working on a Master of Economics thesis on the Commonwealth Grants Commission, the lecturer in ‘Government III (Public Administration)’ left at short notice and I was invited to take over the lectures. (Incidentally, one of students in the class was Ted Wolfers.)

In 1962 I returned to the bank (while still lecturing in ‘Government’ in the evening), but in 1963 I was awarded a University of Sydney post graduate travelling scholarship and in September left for Oxford University, on further leave from the bank. I was at Nuffield College for three years (the last as senior student) working on my doctorate – a comparative study of how federations dealt (or failed to deal) with fiscal inequalities between states – while also finishing off my Master’s thesis, tutoring in both economics and politics for several Oxford colleges, and teaching economics at the Oxford Polytechnic, amongst other things.

After three years in Oxford I went down to London to work in the RBA’s London office. I still had some work to do on the doctoral thesis and the London manager, one of my former bosses in Sydney, set me up in the office used by the governor when he visited, and told me to finish the thesis. So I did that, and submitted, before taking off for a couple of months to work with the Survey Research Centre at the University of Michigan, which had been doing pioneering quantitative work on electoral behaviour, including in Britain (and later Australia), and incidentally meeting Patricia, my wife, who was a graduate student in art history at Michigan.

On returning to England I had my PhD oral examination. The chair of the panel was Australian legal scholar Sir Kenneth Wheare, who, as vice chancellor of Oxford, was also chairman of the Oxford University Press editorial board and after the oral he asked if I would like to publish with them and subsequently steered the thesis through the press. That done I spent two or three months with the RBA in London and short periods as a visitor at the Bank of England (which in 1967 had only one graduate in the bank – a young man fresh from studying Greek and Latin at Cambridge), several discount houses, and the First National City Bank’s newly-opened London office. This was a fascinating period in which ‘the City’ was essentially transitioning from the nineteenth century to the second half of the twentieth.

I returned to Australia around mid-1967 to the Research Department of the RBA, which was then run by Austin Holmes, who had been recruited from the University of Queensland by Nugget Coombs. It was a great privilege to work with Austin, who grew up in the Western Australian wheatbelt and spoke with something of an Australian country drawl, had a razor sharp mind, little tolerance for bullshit, and was a lovely person with a fund of Australian country anecdotes. (He later left the bank to head Gough Whitlam’s Policy Review Committee.) From then until some time in 1969 I worked under Austin Holmes; amongst other things I edited the bank’s annual report in 1969 and we drafted a couple of lectures for Nugget Coombs. In 1968 to 1969 I also taught a graduate class in politics at the University of Sydney.

Early on, Pike suggested that Patricia and I go up to Papua New Guinea for a couple of months to ‘get the feel of the place’. From Port Moresby we travelled to most provinces, meeting with district commissioners and other officials, expatriate planters, mission staff and businesspeople, members of the Bank’s Papua New Guinea Advisory Committee, and travelling on field patrols with Savings and Loan Society officers recruited from the RBA and the commercial banks operating in Papua New Guinea.

Patricia and I had an early interest in Papua New Guinea art and Patricia had worked with the Native Art Gallery in Sydney, before getting a position with the Art Gallery of NSW, and through those connections we had got to know several of the dealers and collectors who travelled around the Sepik. Part of our early experience was a canoe trip up the Sepik with one of these artefact and crocodile skin dealers and we spent a few days in Angoram where a local government election was in progress. (Around this time Patricia had the idea of doing a book on traditional pottery of Papua New Guinea, an idea which culminated in the comprehensive study published in 1982 in collaboration with Margaret Tuckson, The Traditional Pottery of Papua New Guinea.)

A good deal of my time was also spent with the RBA’s Papua New Guinean staff, including the late Sir Henry ToRobert, who had been an RBA-sponsored student at the University of Sydney and later became the governor of the Bank of Papua New Guinea. We got to know a number of the emerging national elite (inter alia, responding to Sir Julius Chan’s request for some tutoring in economics). Back in the RBA in Sydney, as well as preparing papers for meetings of the RBA’s Papua New Guinea Advisory Committee, we spent a lot of time discussing the progression towards a Papua New Guinea central bank, a viable financial system and the possibility/probability of a separate currency.

However, as the movement towards independence began to accelerate, policymaking in the post-Coombs RBA began to move from the (progressive) PNG Department to the (relatively conservative) Banking Department and the Treasury and External Territories Department in Canberra (about which I have written in the paper cited above). There were even reservations about the appointment of ToRobert to the position of manager, RBA, Port Moresby by conservative elements who pushed for the appointment of another Australian.

In the midst of this, Patricia pointed out that the Australian National University (ANU) was advertising for a field director for its New Guinea Research Unit (NGRU) in Port Moresby (the then NGRU field director Dr Marion Ward being about to leave Port Moresby for Canberra, where husband Gerry Ward had been appointed to the chair in Human Geography, Research School of Pacific Studies, ANU). In applying for the position I asked my Nuffield College supervisor, Warden Sir Norman Chester, for a reference; he wrote back agreeing, but asking why I would give up a promising career in the Reserve Bank for a position in Papua New Guinea.

Shortly after my appointment to the NGRU position in 1972 (as a tenured senior fellow but taking a salary cut in the process), I was approached with several job offers: Austin Holmes invited me to join his policy review committee; Nugget Coombs asked me to work with him on a review of the Commonwealth Public Service (along with Peter Wilensky); ToRobert asked me to become his deputy governor in the Bank of Papua New Guinea; and (one which I never quite understood) I got a letter from the ANU (from Colin Ploughman as I recall) asking if I would be interested in the position of Secretary of the ANU. Tempting as the prospects of further working with Austin Holmes and Nugget Coombs were, I stuck with the NGRU job (but continued to work with ToRobert as a member of the board of the Bank of Papua New Guinea), and have never regretted it.

Ronald J. May is an Emeritus Fellow at The Australian National University. His former positions include Senior Economist with the Reserve Bank of Australia, Field Director of the ANU New Guinea Research Unit, and foundation Director of what is now the National Research Institute (NRI) in Papua New Guinea.