Risks Ahead as COVID-19 Cases Surge in PNG 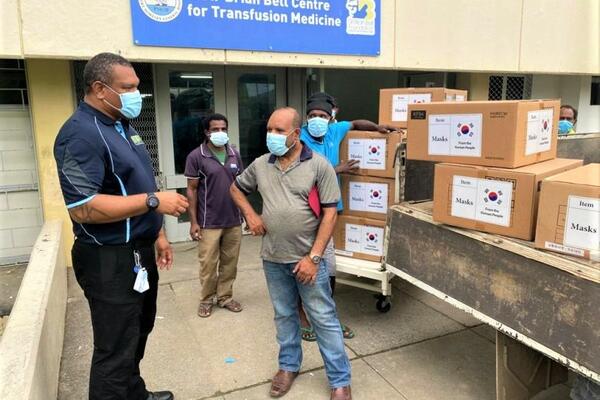 The lack of large-scale population-level testing in PNG means numbers estimated could be misleading. Only about 55,000 tests have been conducted so far, in a nation of about 9 million people.
Source: Supplied
By Michael Kabuni
Share
Tuesday, 16 March 2021 09:01 AM

A year after the first COVID-19 case was reported in Papua New Guinea, the first week of March 2021 has seen the highest weekly increase in reported cases in the country. This blog summarizes the current situation in PNG, and the risks that lie ahead in tackling the current outbreak.

According to PNG’s Health Situation Report #63, between 1-7 March 2021, 357 new COVID-19 cases were reported, bringing the total to 1670 cases so far. This is the highest number of cases reported in a single week in PNG since the start of the COVID-19 pandemic. Sixteen deaths have been attributed to COVID-19 in total.

Since the first case was reported in Morobe in March 2020, 17 out of PNG’s 22 provinces have reported cases of COVID-19. Only Northern (Oro), Gulf, Manus, Jiwaka, and Chimbu provinces have not reported a single positive COVID-19 case.

However, the lack of large-scale population-level testing in PNG means these exceptions could be misleading. Only about 55,000 tests have been conducted so far, in a nation of about 9 million people.

While the first case of COVID-19 in March 2020 was imported from overseas through a mine worker in Morobe Province, all cases reported in the first week of March 2021 were locally transmitted. Transmissions are now occurring within provinces, as well as being imported from one province to another.

The cases in NCD, West Sepik, Western, Madang and Morobe provinces were locally acquired through community transmission. In Eastern Highlands, Western Highlands and the Autonomous Region of Bougainville, recent transmissions were imported from another province or area, or were linked to imported cases.

The outbreak in Bougainville came from the February PNG-Bougainville Joint Supervisory Body (JSB) meeting in Awara for the post-referendum consultation. Hon. Ezekiel Massat, the Autonomous Bougainville Government Minister for Justice, Attorney General and Post Referendum Dialogue, who was infected following the meeting, claimed on social media that there was no COVID-19 clearing protocol for national government delegates flying in from mainland PNG, and that participants were not wearing masks or exercising social distancing. Participants from the joint consultations on both sides have contracted COVID-19 and quarantined.

The rise in community transmissions in recent weeks outside health care settings has been largely been blamed on negligence on the part of citizens, and state failure in enforcing mandatory safety measures.

Unfortunately, health care workers and patients are at the greatest risk of being infected with COVID-19. At Port Moresby General Hospital, 40 health workers have been infected with COVID-19, and 40% of pregnant women admitted to the labour ward have tested positive. Due to limited space in the hospital, COVID-positive women have not been able to be separated from other pregnant women.

Health facilities in PNG are simply not ready to handle a massive outbreak, and some are already struggling. Some hospitals around the country have shut down services as COVID-19 surges due to budget cuts. Port Moresby General Hospital has run out of personal protective equipment, and appealed to the public on Facebook for donations of essentials such as face masks, gloves, and sanitisers to deal with the rise in cases.

March 2021 is going to be a busy month for PNG, with further risks for high local transmission.

The first week of the two-week long Haus Krai in Port Moresby for former Prime Minister Sir Michael Somare drew thousands. Though the seating arrangements inside the Sir John Guise Indoor Stadium, where the Haus Krai is located, are regulated, the manner in which people come is concerning. Large groups of people, many without masks and no social distancing, march in groups to the Haus Krai. It is possible that the spike of COVID-19 cases may continue as a result of these gatherings. The funeral in Port Moresby at the Huber Murray Stadium, and the final funeral in Wewak where about 100,000 people are expected to gather, risk greater community spread.

Another risk is that some Papua New Guineans continue to think COVID-19 is fake. This skepticism persists despite remarks from popular figures like Gary Juffa and Brian Kramer, who have both recovered from COVID-19, appealing to their combined 180,000 followers on Facebook to take the virus seriously. Allan Bird, another popular figure on PNG social media, has appealed to Papua New Guineans to accept vaccines when they become available. Social media and WhatsApp groups were flooded with skepticism when the government signed off on the regulatory approval needed for the COVAX Facility to bring COVID-19 vaccines to PNG, and there is a risk that many will opt out of vaccination once available. The vaccines, paid for by Australia, will be delivered in April 2021. Priority will be given to health workers, the elderly and those with pre-existing health conditions.

A combination of negligence, skepticism, and poorly funded health facilities pose great risks for PNG. Unless these issues are addressed, the current COVID-19 outbreak may get worse.

Michael Kabuni is a lecturer with the political science department at the University of Papua New Guinea.