Peace Unravels in the Solomon Islands 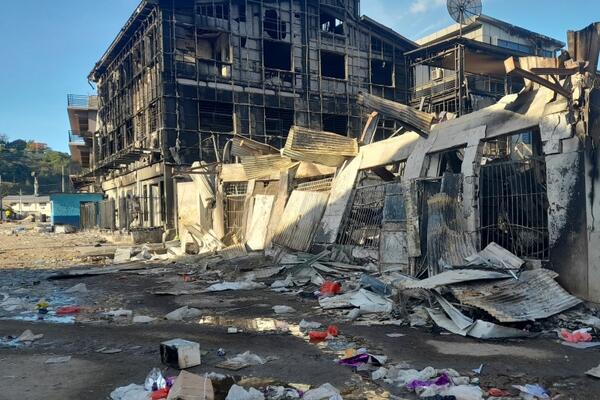 The political process has yet to deliver answers to Solomon Islanders who feel disenfranchised and marginalised. Leader of the Opposition, Mathew Wale, has filed a vote of no confidence against Prime Minister Manasseh Sogavare.
Source: File: STO/AJN
By Anna Powles and Jose Sousa-Santos
Share
Tuesday, 30 November 2021 10:34 AM

On 25 November, a day after the riots in Honiara, Australia announced it would deploy police and military personnel following a request for assistance from the government of the Solomon Islands. This is fast shaping up to be a regional response to the unrest in the Solomon Islands.

Papua New Guinea also responded to a request from the Solomon Islands deploying a contingent of police and correctional officers. Australia has since announced an additional deployment of Australian Federal Police and Fiji has announced 50 defence personnel will be embedded with the Australian contingent. There are also indications that New Zealand will provide additional support.

An uneasy peace has replaced three days of looting and burning, but there are serious concerns about a return to violence. The political process has yet to deliver answers to Solomon Islanders who feel disenfranchised and marginalised. Leader of the Opposition, Mathew Wale, has filed a vote of no confidence against Prime Minister Manasseh Sogavare.

Longstanding grievances over inequitable and uneven economic development, divisions between provincial and national governments, deep frustrations over corruption and the capturing of the state by commercial interests, led to ‘the Tensions’ in 1998–2003. This led to the deployment of the Regional Assistance Mission to Solomon Islands (RAMSI) in 2003. These undercurrents have simmered for 14 years, boiling over in 2006 and again in 2019. In November 2021, a peaceful march calling for the resignation of Sogavare, led by those from the country’s most populous island of Malaita, deteriorated into riots.

Strategic competition may have been a spark behind the riots but it was also a pawn. China, Taiwan and the United States have jostled for influence in Malaita since Solomon Islands switched diplomatic recognition from Taiwan to China in 2019. Malaita’s popular Premier, Daniel Suidani, opposed the switch and has leveraged Taiwan’s eagerness to retain a foothold in Solomon Islands leading to accusations by the national government that Malaita is in breach of the one China policy.

The United States’ pledge of US$25million in 2020 bypassed national government mechanisms for donor assistance and exacerbated divisions between Honiara and Malaita. China’s embassy in Honiara has run a disruptive public diplomacy campaign, claiming that actions by Malaitan leaders were illegitimate. The Global Times alleged that Australia and the United States encouraged the unrest in Honiara.

Sogavare has also used geopolitics as a gambit. Seeking to divert attention away from the domestic drivers of the unrest, he blamed foreign powers for influencing Malaitan discontent. While attributing the unrest in the Solomon Islands solely to geopolitical manoeuvring is simplistic, it provides a warning of how strategic competition can undermine resilience and contribute to fragility.

Australia’s deployment is under the Australia–Solomon Islands Bilateral Security Treaty (2017), signed the year that RAMSI concluded. The purpose of the treaty is to provide the legal basis for Australian police, defence and civilians to rapidly deployments in the event of a major security challenge or humanitarian emergency.

The scope of the mission is to ‘assist in the provision of safety and security of persons and property’. Australia has also deployed a naval vessel to support the police with maritime security. Australian policing and defence personnel in Solomon Islands will have the same powers, privileges and immunities provided for under the 2003 agreement that enabled RAMSI and were implemented in Solomon Islands domestic law. The Australian contingent will be able to exercise the same powers, privileges and authorities as local police and use force ‘as is reasonably necessary to achieve the purposes of the deployment’.

This is an opportunity for Australia to demonstrate its commitment to the Pacific family. The bilateral security treaty includes provisions for a third state to contribute personnel at the invitation of Australia and with the consent of the Solomon Islands. Fiji’s deployment may fall under this provision. Papua New Guinea’s deployment falls under a bilateral policing arrangement between Papua New Guinea and Solomon Islands. This could pose challenges to command, control and coordination and will be a test of interoperability between the various forces. Discussions are underway to strengthen the existing contingent with contributions from Fiji and New Zealand.

At the regional level, Papau New Guinea’s Prime Minister James Marape called for calm and the Pacific Islands Forum Secretary-General Henry Puna linked peace and security in countries with peace and stability at the regional level. New Zealand referred to the principle of tātou tātou, or all acting together for the common good, and Australian Prime Minister Scott Morrison has suggested a desire for greater New Zealand involvement.

Security personnel deployed to Solomon Islands will face additional challenges to their legitimacy. The dynamics and demographics of Solomon Islands have shifted since RAMSI’s arrival 17 years ago. Local frustrations as a result the COVID-19 pandemic and disinformation spread on social media platforms may further inflame dissent. There is no indication yet that China will evacuate the 3000 Chinese citizens in Solomon Islands as it did in 2006 and has asked Solomon Islands to ‘take all measures necessary’ to protect Chinese nationals and institutions. Extraction efforts by China would also prove to be challenging.

The Solomon Islands COVID-19 free status and low vaccine rates have contributed to fears that the contingents could unwittingly infect the local population. The estimated economic losses are US$34 million, compounding existing economic woes which will further drive discontent with the government and social divisions. Ultimately, how the Sogavare government addresses grievances over economic development and political alienation, starting with dialogue and reconciliation, will determine the outcomes over the next days and weeks.

Source: This article first appeared on the East Asia Forum.

Anna Powles is Senior Lecturer in the Centre for Defence and Security Studies at Massey University.

Jose Sousa-Santos is a Pacific Policy Fellow at the Australia Pacific Security College.