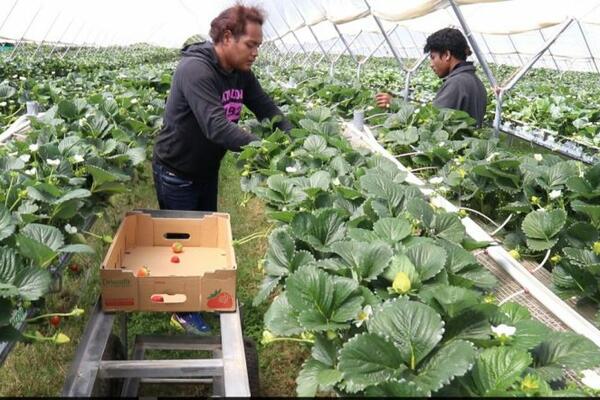 Recently, the Seasonal Worker Programme (SWP) and Pacific Labour Scheme (PLS) have got a bad rap in the press.

Press reports have claimed that meat workers hired under the PLS in Wagga Wagga and Inverell have been given accommodation that is too expensive (the former) and also substandard (the latter). Some SWP workers stranded in Tasmania have, according to another media report, taken to begging for food. And the United Workers Union has started a campaign to improve conditions and pay for SWP workers.

The spate of reports is puzzling given the tight regulations and close monitoring that surround both schemes. A major report by University of Adelaide academics Sustainable solutions: the future of labour supply in the Australian vegetable industry found that the “SWP results in less exploitation of workers … when compared with other low-skilled visa pathways”, especially backpackers. That’s right: less not more.

The SWP has grown rapidly in recent years, reaching just over 14,000 visas in the 12 months to the end of January 2020. Its greater use is part of the solution to labour market abuses in the horticultural sector. The United Workers Union should show more interest in backpackers working on farms, since they still outnumber seasonal workers by about four to one and are more likely to face abuse. A 2016 Fair Work Ombudsman (FWO) inquiry into backpackers working in agriculture found that more than one-third said they were paid less than the minimum wage. In particular, the FWO inquiry found that the offer of a second-year visa in return for three months of agricultural work in the first year created an environment where “exploitative workforce cultures/behaviour are occurring in isolated and remote workplaces.”

The PLS is a newer and much smaller scheme (currently 976 workers in Australia), but is just as tightly regulated. It is also the only visa scheme to have its own government-funded social support system for participating workers.

So what is going wrong? Why the flurry of media reports? Some of the media allegations indicate how high the SWP and PLS bar has been set. One of the complaints of the Wagga Wagga workers was that they were not met at the airport, as they should have been under PLS rules. As far as I know, no other temporary migrants are required to be met at the airport by their prospective employer.

Other complaints relate to the unique and unanticipated difficulties caused by the recent international border shutdowns. The 7,000 SWP workers now stranded in Australia are able to work, but not all have been able to find work, and some have decided not to. Like other temporary migrants, none are eligible for government benefits (though it seems like the group in Tasmania asking for food was in fact having their rent and food bills looked after). Some PLS workers have also been laid off, and others have reduced hours. Many temporary migrants in Australia are currently suffering.

It is also the case that complainants also only paint one side of the story. Employers are normally reluctant to speak out, as are governments. The recent rapid growth in the PLS might be part of the story as well.

All that said, the recent media reports also show that no matter how good the system, there will always be abuses of temporary migration schemes, where the employer has a lot of bargaining power – which is one of several reasons why I have long advocated for the introduction of permanent pathways for Pacific islanders into Australia. That said, temporary migration is clearly here to stay, and what matters with all our temporary visa schemes is whether the system is able to detect and respond to abuses.

The SWP and PLS are unusual in this regard. Participating employers, if found not to have followed the rules, are liable to lose their authorisation to participate in the schemes. No court proceedings are required. If the supervising department is unhappy, it just blacklists the employer. That is very different to the way employers of backpackers are treated. Farmers require no permission to hire backpackers, and seem to face few consequences if they abuse them. Licensing of labour hire companies would be a big step forward, but remains a work in progress.

Both the SWP and PLS are important for the Australian economy. We need more Pacific workers not fewer. In particular, many backpackers have gone home, and there are credible claims that fruit and vegetables will go unpicked this summer unless we arrange for the arrival of more Pacific workers into Australia over the next few months.

The two schemes are also increasingly important for the Pacific. Already in Tonga, our estimate is that SWP earnings exceed Australian aid and exports to Australia combined.

Finally, the SWP and PLS are very popular schemes, with massive excess demand in the Pacific. In a recent survey of some 389 seasonal workers from nine countries in Australia, 91% said that they would recommend the SWP to others. These are not just idle words. Pacific workers also vote with their feet: the average seasonal worker comes to Australia not once but between three and four times.

Good on the media for putting the spotlight on claims of abuse of Pacific workers. Especially in a country as big as Australia, the media can play an important enforcement and deterrent role. By putting the focus on isolated incidents of abuse, they can keep those incidents isolated.

But let us not commit the mistakes of ignoring Pacific voices in favour of these two schemes, and of making sweeping judgements on the basis of a few bad experiences. It is hard to think of a more important or positive development in Australia-Pacific relations than the growth in regulated labour mobility from the Pacific to Australia over the past decade.

Let us also not make the mistake of further tightening what are already the two most regulated Australian temporary migration programs. The more regulated they are, the less they will be used. That will not only be bad for the economies of Australia and the Pacific, but in horticulture in particular it will perpetuate the reliance on backpackers, a completely unregulated and often exploited source of labour supply.