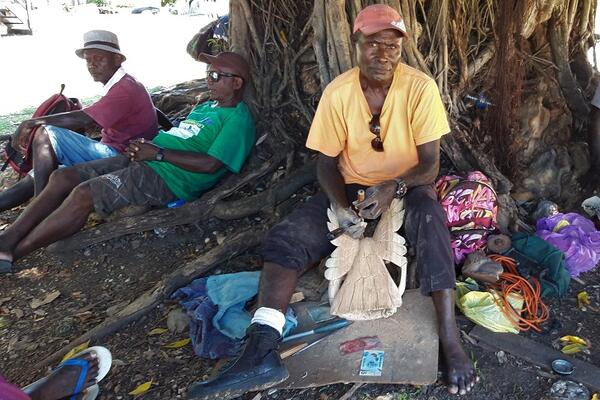 As visitor arrivals in Honiara dropped, people like Peter are now finding it difficult to make a living from their hard work.
Source: Georgina Kekea
By Georgina Kekea
Share
Thursday, 26 March 2020 11:12 AM

Peter is a carver from a province called Choiseul. Choiseul lies southeast of Bougainville in Papua New Guinea and is one of the far flung provinces of Solomon Islands.

Today Peter lives in Honiara and sells carving for a living. Like most other artists in Honiara, rooms are provided for locals like Peter at the National Art Gallery.

This is a hub hosted by the government’s Ministry of Culture and Tourism for locals to sell art and crafts, artifacts and painting.

But the room comes at a cost. Rental fee per room depending on the size is SBD$500 to SBD$1000 per month. Peter has the $1000 package per month. This room he shared mostly with his relatives.

Today when interviewed Peter said he has not sold any carving at all.

“I also have my sales man here who walked from door to door. Today he went as far as King George but as you can see, he sold nothing today”, Peter said.

King George is the name of a location in the eastern side of Honiara. To get to King George one has to travel about 5km from Honiara’s CBD. Local sellers in Honiara often travel these long distances trying to sell their items.

As visitor arrivals in Honiara dropped, people like Peter are now finding it difficult to make a living from their hard work.

Unlike daily necessities like food stuff and toilet paper, products like carving and artifacts are now being pushed back to the end of the shopping list.

For most shoppers, these items do not even make it into the shopping list. But for Peter, monies earned from his carvings are his bread and butter.

For some 30 years this is only Peter’s way of life.

“I come from Katurasele in South Choiseul. I have a family back home. Some of my grandchildren are in town”, Peter said.

The monies earned are to support his family back home and for his daily sustenance.
The travel restrictions enforced by government plus the global restrictions of travelers worldwide has really been a blow to people like Peter.

Now NGOs and stakeholders are also cancelling meetings and forums living no room for Peter to thrive.

“Our domestic market is very small. And this product is not like noodle and taiyo (canned tuna) which people would want to buy on a daily basis. I do not know what to say. If I do not pay my rent I will have to close my shop and go home”, Peter said.

Next to Art Gallery is the four (4) star Heritage Park Hotel. Employer to 178 staff, the hotel is not without its woes. General Manager, Sanjay Bhargava said bookings for rooms and use of facilities at the hotel have been cancelled.

He said SBD$40 million was lost in revenue for cancellation of room accommodation alone.

“We have received 485 cancellation of accommodation bookings till now”, Bhargava said.

But with a gloomy outlook welcoming 2020, Mr. Bhargava said without really understanding how long this pandemic will go on for, their only hope is for the situation to end soon.

“If worst comes to the worst, we will have to think of some plans. Right now we do not have a contingency plan but there will certainly be options should the situation worsen”, he said.

Pay cuts including staff lay-offs are measures which he hopes will not happen. But he said measures are in place to cut back on expenses. Recruitment of new staff is definitely one of the curtailed measures which the hotel has to undertake. For expat employees traveling is definitely off the list until such time people are free to travel.

“All I can say is for people not to panic. The health measures people need to adopt like keeping hands clean are important” Bhargava said.

For Mr. Peter Likaveke, the local carver all he can say is for people to be optimistic.

“Keep the faith that all will be well. Just keep smiling and laugh a lot even when the situation is not good. This is what kept me going”, he said.