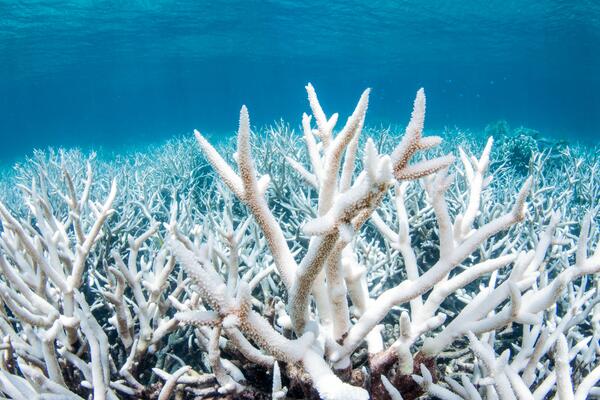 The Pacific Islands consist of 98 percent ocean and two percent land. With Pacific people already impacted by climate change, the threats posed by ocean acidification are overwhelming, adding yet another layer to the long list they must suffer.

Amplifying our Pacific voice at every opportunity available, the UN Ocean Conference in Lisbon, Portugal, has heard the Pacific Small Islands Developing States (PSIDS) call upon the global community, yet again, to do more.

“Small Islands Developing States are particularly vulnerable to the impacts of ocean acidification, especially in relation to coral depletion. Coral reefs play a key role in ocean ecosystems,” stated Hon. John M. Silk, the Minister of Natural Resources and Commerce of the Republic of the Marshall Islands.

Speaking on behalf of PSIDS during a special session - the Interactive Dialogue on Minimising and addressing ocean acidification, deoxygenation and ocean warming, the Minister stressed the important role of coral reefs upon our livelihoods and security.

“Weakened coral reefs also mean that SIDS are more vulnerable to the impacts of rising sea levels, increasing severity of tropical cyclones and increasing occurrence of king tides. Globally, over 50% of the countries that have a high dependence on coral reefs are located in the Pacific.”

Our global ocean has absorbed approximately 30 percent of CO2 released into the atmosphere. This CO2 combines with seawater to produce carbonic acid which acidifies seawater and depletes it of carbonate.

This will make it difficult for some marine life such as shellfish, sea urchins and corals to build their skeletons and shells resulting in a reduction in growth for many of these species and ecosystems.

This will result in reduced growth for many of these species and ecosystems. One study has projected that by 2050, coral reefs will dissolve faster than they can build their skeletons. Coral reefs play a role in dissipating 97 percent of the wave energy that would otherwise impact shorelines.

The reliance on and connection to the ocean for Pacific peoples cannot be understated, as demonstrated by its vulnerability to ocean events such as ocean acidification.

The impacts of climate change, including ocean acidification and sea-level rise, remain the single greatest threat to the livelihoods, security and wellbeing of the Pacific.

“We must also note that many countries, including Annex 1 countries under the UNFCCC, that have large Exclusive Economic Zones are not fully documenting the impacts caused by increasing CO2 emissions to regional food security, ocean industries or marine economies,” said Minister Silk.

“In order to address this existential threat, the Pacific calls for renewed commitment and focus on Sustainable Development Goal 14.3 on measuring ocean acidification through enhanced scientific cooperation.”

This was implemented by the Secretariat of the Pacific Regional Environment Progrmame (SPREP). This was the only ocean acidification project that provided an initial understanding of the potential adaptation options and targeted Fiji, Kiribati and Tokelau. It came to an end in April this year.

This was established to develop and support regional expertise in monitoring ocean acidification including housing and maintenance of equipment for research and training in the region. It will also assist countries to submit monitoring data from the region to established OA data portals.

“From this dialogue, we would like to see donors and development partners significantly increase and simplify access to climate financing for the ocean and coastal climate monitoring and research, risk assessments and remediation or adaptation measures,” stated Minister Silk.

“The PPOA is an example that should continue to be supported and replicated as a measure to assist countries to understand how to address the impacts of ocean acidification.”