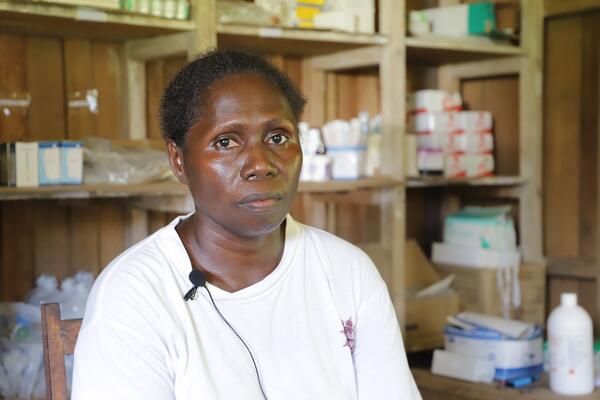 Being the only nurse at Leona, proves to be very difficult. She says the clinic needs to be refurbished as the building was only built for temporary use.
Source: Jeremy Gwao
By Jeremy Gwao
Share
Tuesday, 21 July 2020 08:58 AM

Joan Tagolo is 45 years of age and has been a nurse for over 20 years now.

Today she now serves at the local health clinic in her village of Leona in North Vella la vella.

“I decided to come back to the village and render my services here in my home village”, Joan says.

She says one of the main reasons to serve in her home village is to look after her mother as well.

“My mum is asthmatic and getting old now”, Joan explains.

She says that she had to forgo her job posting at the national referral hospital to come to the village.

She used to work in a clinic in Marovo.

“But coming here I faced many challenges,” Joan says.

Being the only nurse at Leona, proves to be very difficult. She says the clinic needs to be refurbished as the building was only built for temporary use. This was after the 2007 earthquake and tsunami in the western province.

“Waste disposal is an issue and the maternity room is just not suitable for mothers to give birth in”, Joan says.

She says her office does not offer the best condition but she has a job to do.

On average she receives 15 patients a day. Joan says she also tries as much as possible to make sure her medical supply does not run out before new supplies arrive.

“The medicines received from Gizo hospital include 1000 panadol, 1000 septrin, 1000 aspirin and other vaccines."

Joan says her only wish is to see an upgrade of their village health clinic.

Meanwhile the integrated people-centred health service case study says many health centres are run down with up to 70 percent requiring upgrade, repair or renovation. The report says there were no new consistent standards for quality of health facilities and some new facilities were being built without reference to national policies.

Over 50 percent of the national health workforce are nurses or nurse aides with two thirds of them in the provinces.

Currently the government has adopted Universal Health Coverage (UHC) as the guiding principle for the provision of health services in the country.

The goal of UHC is to ensure that everyone in the country has access to a package of quality health services without falling into financial hardship by paying for them.

To achieve this goal, a key strategy was outlined by the Government in the National Health Strategic Plan 2011-15 to move towards the ‘packaging of services’ at different levels of care.

This theme was also continued in the 2016-20 National Health Strategic Plan (NHSP). The plan was focussed on improving child and maternal health outcomes by addressing communicable diseases and responding to noncommunicable diseases, with the aim of improving the health of the population, especially those most vulnerable and isolated.

The Ministry for Health and Medical Services (MHMS) should by now be also working on developing a process for formal registration of new health facilities.

The registration process will mean that facilities established after the adoption of the Role Delineation Policy will only be supported by the MHMS in relation to staffing and/or provision of drugs and medical supplies, if they are formally registered by the MHMS.

Registration will be aimed at ensuring that facilities are built where they are needed, rather than on the basis of political or community influence.

Facility Registration will also require that facilities meet minimum standards for health facilities (to be developed) in the Solomon Islands.

Leona village is about an hour’s boat ride from Gizo.