“Nothing is Impossible, Never Give Up:” An Outstanding Woman Shares Her Story 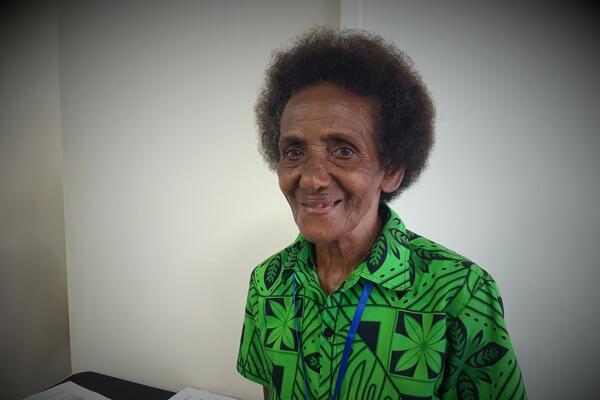 “What I want to say to the women now is to never give up. Keep going. A lot of women suffer from abuse in their homes. It should not be because in the eyes of God we are all equal. I want us women to be strong and to step out of our comfort zones. When I see women taking up leadership roles, I feel so happy”.
Source: Georgina Kekea
By Georgina Kekea
Share
Wednesday, 30 September 2020 08:51 AM

“Today I want to cry when I think of the different experiences I have come across in my life”, Rose Sese says.

Rose is a recipient of the Outstanding Women’s Award, an initiative that focuses on the identification and acknowledgement of women leaders in small communities.

A mother of seven, Rose is a farmer. She comes from Veramogho village in the South Guadalcanal but now settled in Central Guadalcanal where she has her farm. Her husband is a teacher by profession. Today Rose is attending a workshop organized by the Strengthening the Electoral Cycle in the Solomon Islands project (SECSIP), a project funded by Australia, EU and UNDP.

“I feel so happy. I have never experienced this in my life. I thought I was just doing my day to day job and did not expect to be recognized”, Rose says.

It was more than a decade that Rose decided to go into agriculture. Since venturing into Agriculture, she has been instrumental in getting food supplies from Central Guadalcanal into Honiara. Apart from providing food supplies she also engages a lot of people from her community on the farm.

“I mostly have women and youths that come to work on the farm. Those that are without jobs, the widows, and students. I really do not have any employees but engage people mainly on a short casual basis’, Rose says.

Rose left her home village of Veramogho at the tender age of 12. She came to Honiara to go to school. She attended Betikama primary school, starting in year three. She left Betikama when she reached year eight.

“I dropped out of school then as I could not pass my tests. You know, coming from the village, we do not really know what education is. Just for the sake of going to school, we were made to go through the education system”, Rose says.

From thereon Rose says she went to a laboratory in Honiara and asked for a job.

While Rose has a lot to be thankful for now, she says it does not come easy. She says there were the dark days and the challenges in the past that made her to be who she is now.

She remembers the ethnic tension that brought the country to its knees and the feeling of hopelessness when as a mother she feared for the safety and livelihood of her children. She says it has not been easy.

“I was one of the women that traveled extensively to promote peace. We were the mothers and prayer warriors that wanted to see peace restored on the island of Guadalcanal and the country as a whole. We traveled to the weather coast of Guadalcanal in our efforts to bring back peace. It was quite dangerous”, Rose says.

Fast forward to 2020, Rose is now a successful farmer in Central Guadalcanal. She supplied root crops, fruits and eggs mainly to Heritage Park Hotel and other buyers whom she mostly has an agreement with. She says she started her farm with just the basic tools and manpower.

“There was no huge machinery or equipment. It was just hard work and labor. Looking at the farm now, it is no different to those that were cleared and tilled with machinery. Nothing is impossible. We can start with nothing”, Rose says.

While Rose appreciated the recognition given to her, she also wished to acknowledge the Ministry of Agriculture and Livestock (MAL) for their support. She says from her work in agriculture she was able to receive support under the Rural Development Program (RDP).

“I support farmers with tools and seeds. I also registered my company called Aruligo Areatakiki Fresh Produce Community Company. I buy fresh produce from the farmers in the village and sell on their behalf. I already bought a bus and now I am building an office”, Rose says.

Asked what would be the support women in the community needs Rose says exposure. She says in 2018 she led the women’s church group of central Guadalcanal to Fiji.

“One of the women shouted in the plane. She says she often sees the big plane pass by overhead while she works in the garden. Never had she thought she would travel in one as only those that work in the offices travel like this. Everyone in the plane applauded after she finished her statement”, Rose says.

She says after their trip, she saw a difference in how the women interact and raise issues in their community.

“You know every day we work in the garden, we fetch water, we go to the market, that’s the only life we know. But once exposed to different experiences, culture and lifestyle, we were able to understand things better”, Rose says.

“What I want to say to the women now is to never give up. Keep going. A lot of women suffer from abuse in their homes. It should not be because in the eyes of God we are all equal. I want us women to be strong and to step out of our comfort zones. When I see women taking up leadership roles, I feel so happy”.

The aim of the ‘Outstanding women’s award,’ of which Rose is a recipient, brings together women who are most valued and respected in their communities because of their actions, behavior or just general attitude. A voting was conducted to choose amongst the nominated women in each province. The Outstanding Women’s Award was launched in 2019. Eleven women have been elected due to their contributions and leadership values. Rose is the recipient of the ‘Outstanding women’s award’ in Guadalcanal.