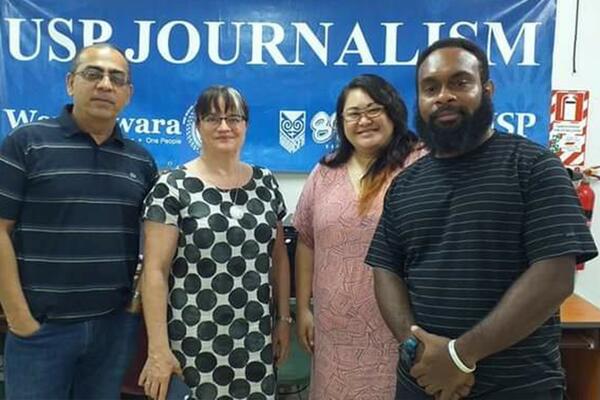 These crucial questions are addressed in a recently published research funded by The University of the South Pacific (USP).

Published in the latest Pacific Journalism Review, the research investigates the journalism culture in the Pacific Islands, with the findings offering insights into possible remedial methods and future directions.

Associate Professor in Pacific Journalism at the School of Pacific Arts, Communication, and Education (SPACE), Shailendra Singh, co-authored the paper with Professor Folker Hanusch from the University of Vienna who is also an international expert on world journalism cultures.

He stated that while global scholarship on journalists’ professional views had expanded tremendously in recent decades, the Pacific remains a blind spot. For instance, the Pacific was not featured in the Worlds of Journalism Study on 76 countries, perhaps the most ambitious undertaking in the field as yet.

"Through such research, we find out many things including the challenges they face."

He discussed how the data could be used to support media organisations and national governments make better policy decisions.

"Our survey found an improvement in education and experience levels in the current cohort of journalists, compared to 30 years ago, but we are still lagging at the international level. This (data) may persuade governments, universities, and international donors to provide more fellowships and scholarships to build on the improvements of the last 30 years," Assoc. Professor Singh said.

"In the face of imminent concerns like climate change, this work can be utilised to identify future paths and remedial measures," Assoc. Professor Singh remarked.

He acknowledged USP’s Journalism Teaching Assistants, Geraldine Panapasa and Eliki Drugunalevu for helping out in the field work, as well as the USP Research Office, for sponsoring the study, along with USP as a whole for supporting the journalism programme. He also praised Professor Pal Ahluwalia, USP Vice-Chancellor and President (VCP), for his vision, which places a high value on journalism.

"As well as our co-funders, the US Embassy in Fiji and the Pacific Media Centre in Auckland, New Zealand. Special thanks to Professor David Robie, the former USP Journalism coordinator and managing editor of Pacific Journalism Review for publishing our work," he added.

Professor Ahluwalia praised the team's joint work in publishing this study and commended them on the study's astounding findings.

He stressed that journalists play a significant role in the Pacific, and that the concerns identified in the report must be addressed.

"We are required to look after their well-being and look into the issues they are encountering,” the VCP added.

He expressed his desire to see more comprehensive studies in the future, which he believes will help the Pacific region.

The article can be found on: https://bit.ly/3beSCvO