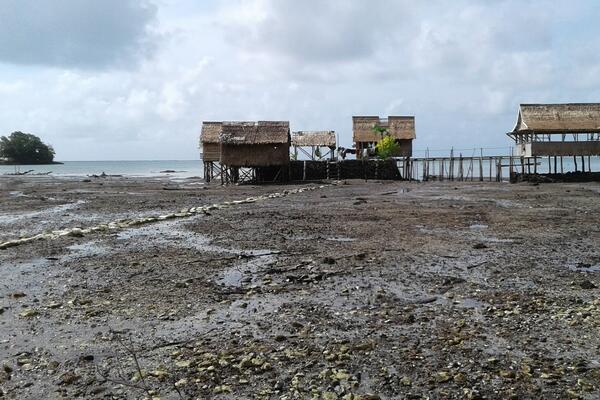 “We are at the forefront and we will continue to face the issues of climate change. For that we will continue to advocate for the reduction in carbon gas emissions”.
Source: Climate Change Division (SIG)
By Georgina Kekea
Share
Tuesday, 17 August 2021 07:41 AM

‘1.5 degrees to stay alive’ is the voice from the Pacific to the world’s biggest carbon gas emitters as a major UN scientific report declares "code red" for humanity.

The assessment of our planet's future was made by the UN's Intergovernmental Panel on Climate Change (IPCC), a group of scientists whose findings are endorsed by the world's governments.

The study released last week warns of increasingly extreme heatwaves, droughts and flooding, and a key temperature limit being broken in just over a decade.

Solomon Islands, like many other small island states, is concerned about the findings of the working group.

Permanent Secretary in the Environment Ministry, Dr. Melchior Mataki says it is now very clear from the report the impact humans have on the environment that contributes to the rise in global temperature.

“The Solomon Islands has always been calling and maintaining that science must be the driver of negotiations at the conference of parties. There are other parties who also have other interests that they do not want what Solomon Islands is saying.

“They would like to water it down or noting it down only. Solomon Islands has always been pressing for that because we know that to reduce or to keep the temperature down, major emitters have to take drastic measures”, Mataki says.

He says this is a challenge for small island countries like Solomon Islands but they will continue to advocate and call on the world’s major gas emitters including our neighbours Australia to reduce their carbon footprint.

The IPCC Working Group 1 Report says evidence shows that greenhouse gas emissions from fossil fuel burning and deforestation are choking the planet and putting billions of people at immediate risk. Global heating is said to affect everyone with many of the changes becoming irreversible.

In Solomon Islands, five islands have disappeared in recent years due to sea level rise, with many more islands at risk of being submerged under saltwater in the next 10 to 20 years if nothing is done to reduce the rise in global temperature. The weather pattern has also changed drastically with the frequency of extreme weather conditions. Traditional knowledge on weather indicators is also not what they used to be.

A report on Traditional Knowledge in Makira/Ulawa province done by the Solomon Islands Met Service in partnership with World Vision under the Australian Humanitarian Partnership found that there is a 50 - 80 percent chance of accuracy in natural indicators.

While Australia has been supportive of Pacific Island countries through its donor funded programs and activities, it has recently received a backlash from a civil society group called the Pacific Islands Students Fighting Climate Change.

The PISFC says Australia’s decision not to phase out coal is disappointing.

The Australian High Commissioner to Solomon Islands, Dr. Lachlan Strahan says Australia is resolutely committed to all the goals of the Paris Agreement and is taking climate action to ensure the target goals are achieved to keep a global temperature rise this century to well below 2 Degrees and to pursue efforts to limit the temperature increase to 1.5 degrees Celsius.

“The Paris Agreement recognizes that parties’ actions to achieve its goals are nationally determined and does not prescribe a technological or policy pathway. We are building and investing in renewable energy at record levels and taking practical steps to expand renewables as part of our energy mix. We are also working with countries in our region to support their efforts towards achieving the goals of the Paris Agreement”, Dr. Lachlan Strahn said.

The United Nations climate conference in Glasgow in November this year is said to be a very important one.

The UN General Secretary on the IPCC Report 1 says the viability of societies depends on leaders from government, business and civil society uniting behind policies, actions and investments that will limit temperature rise to 1.5 degrees Celsius.

“We owe this to the entire human family, especially the poorest and most vulnerable communities and nations that are the hardest hit despite being least responsible for today’s climate emergency.

“The solutions are clear. Inclusive and green economies, prosperity, cleaner air and better health are possible for all if we respond to this crisis with solidarity and courage.

“All nations, especially the G20 and other major emitters, need to join the net zero emissions coalition and reinforce their commitments with credible, concrete and enhanced Nationally Determined Contributions and policies before COP26 in Glasgow”.

The UN Secretary General says if countries combine forces now, the climate catastrophe can be averted.

“But, as today’s report makes clear, there is no time for delay and no room for excuses. I count on government leaders and all stakeholders to ensure COP26 is a success”.