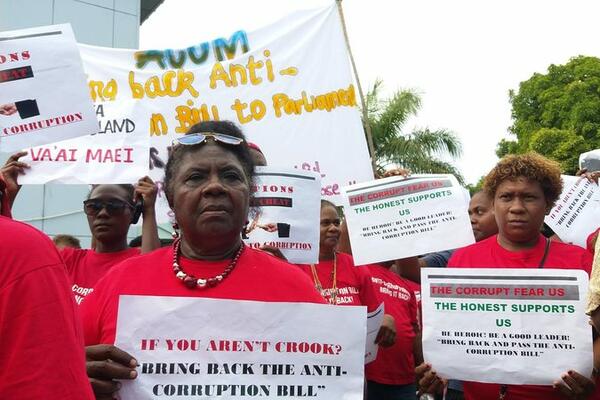 Overall, our research suggests that anti-corruption reform in the post-RAMSI period has been marked by positive and negative trends.
Source: File: RNZ
By Grant Walton and Husnia Hushang
Share
Wednesday, 13 April 2022 10:44 AM

Over the past three decades, anti-corruption reforms have become a central part of international post-conflict interventions.

From Liberia to Iraq, donor-led interventions have increased funding for anti-corruption reforms, to help build legitimacy and good governance in conflict-ravaged countries.

However, some scholars and development practitioners have questioned the sustainability of these efforts, suggesting that as donor ‘leverage’ wanes, it is likely political support for anti-corruption reforms will diminish.

Our recent Asia & the Pacific Policy Studies journal article examines budgetary documents with a focus on financial support for anti-corruption reforms in Solomon Islands from 2010 to 2020, to understand changes to political will during and after the region’s largest peace-building intervention.

The Regional Assistance Mission to Solomon Islands (RAMSI) intervention (2003–2017) was formed in response to ethnic clashes, and drew together a regional force of peacekeepers and development experts to improve Solomon Islands security and governance.

Many scholars and practitioners acknowledge that RAMSI played an important role in easing tensions and keeping the peace. Opinions are split, however, when it comes to assessing RAMSI’s legacy around building the Solomon Islands state and improving governance. While some have offered cautiously positive assessments, others have been more critical. These debates have mostly played out during the RAMSI intervention, which means the analysis has not accounted for post-RAMSI developments. This is where our study comes in.

Overall, our research suggests that anti-corruption reform in the post-RAMSI period has been marked by positive and negative trends.

On the positive side of the ledger, while the post-RAMSI trajectory has not always been linear, key anti-corruption organisations received similar or greater levels of funding as they did in the years leading up to RAMSI’s departure.

To add to these findings, we also know that after RAMSI’s departure policymakers passed legislation to strengthen the Ombudsman, protect whistleblowers, and introduce a new Independent Commission Against Corruption (ICAC). So, post-RAMSI, policymakers have not reversed anti-corruption reforms that began during, and were supported by, RAMSI.

The Solomon Islands case shows that, contrary to the fears of some scholars and practitioners, politicians are willing to support anti-corruption reform and organisations after peacekeepers have officially left and their influence has reduced. While key development partners like Australia still provide advice and assistance, we show that their leverage over the government has reduced in the post-RAMSI period.

On the other hand, our analysis reveals some troubling signs. For a start, over the past decade, anti-corruption organisations have not always received their promised allocations, depriving them of millions of dollars.

Second, and most importantly, while politicians have supported anti-corruption reform, little has been done to address some of the key drivers of corruption. Politicians still use their constituency development funds to buy votes and supporters. Corruption in the logging industry is still allegedly rampant.

Finally, international indices suggest the severity of corruption in the country has decreased over the past ten years, but concerns about its impacts remain. Frustration with corruption was a key factor in riots breaking out in Honiara in 2019 and 2021.

These findings suggest a contradiction at the heart of the nation’s anti-corruption efforts: on the one hand, anti-corruption agencies have been financially supported; on the other, some believe opportunities for corruption have grown.

In the meantime, we suggest more needs to be done to ensure the government’s anti-corruption allocations materialise, and that the nation’s new anti-corruption watchdog – the Solomon Islands ICAC or SIICAC – is provided with the resources it needs to independently and proactively investigate corruption.

This article is published in partnership with Policy Forum. It is based on an article in Asia & the Pacific Policy Studies journal, ‘Long live RAMSI? Peace-building, anti-corruption and political will in Solomon Islands’, by Grant Walton and Husnia Hushang. URL: https://onlinelibrary.wiley.com/doi/10.1002/app5.343

Grant Walton is a Fellow at the Development Policy Centre and Chair of the Transnational Research Institute on Corruption and the author of Anti-Corruption and its Discontents: Local, National and International Perspectives on Corruption in Papua New Guinea.

Husnia Hushang is School Administrator at the ANU Research School of Economics, and a Research Assistant at the Development Policy Centre. She has a Masters of Public Policy and a Graduate Diploma of Public Administration from the ANU, and a Bachelor of Law and Political Science from Kabul University.