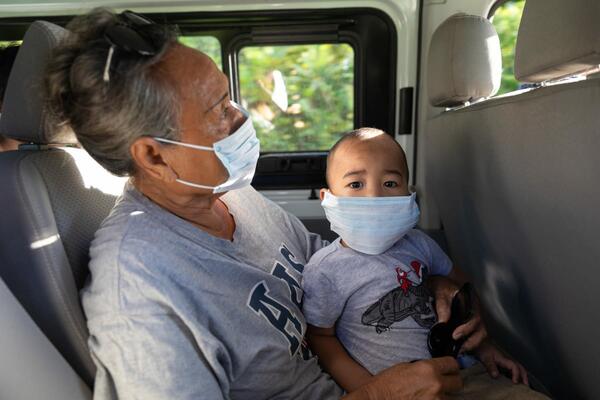 Kiribati, Samoa, and the Solomon Islands have entered lockdowns after overseas arrivals brought COVID-19 to the Pacific Island nations, which had largely managed to keep the virus out since the pandemic began.

After two years COVID-free, Kiribati has recorded its first cases after two-thirds of passengers on the first international flight into the country in 10 months tested positive. The government confirmed that there were 36 positive cases on board but said all passengers on the flight had been quarantined.

Just days later, though, cases in the community were detected, leading the government on Sunday to impose a four-day lockdown, including a 24-hour curfew.

“There is now an assumption that Covid-19 is now spreading in the community on South Tarawa and Betio,” the government said.

The Kiribati government hasn’t announced whether the lockdown will be extended but on Tuesday recorded 23 new positive case. Betio, the most populated section of South Tarawa, has one of the highest population densities in the world, with 15,000 inhabitants per square kilometer.

Samoa has followed a similar trajectory, successfully keeping the virus at bay for the last 24 months, recording just two cases in November 2020 in Samoan citizens repatriated from Australia.

The Samoan government announced over the weekend that it had recorded 15 new COVID-19 cases among 73 passengers who arrived on a flight from Brisbane, Australia, a few days earlier.

The government announced a 28-hour nationwide lockdown, banning all gatherings and requiring people to stay at home. Secretary to Cabinet and Chairman of the National Emergency Operation Center Agafili Tomaimano Shem Leo said the “day dreaded by authorities for Covid-19 to invade Samoa is here.”

“We cannot afford to be complacent. Our country is in a national emergency and our security is under siege from Covid-19,” he said.

Samoan Prime Minister Fiame Naomi Mata’afa announced Wednesday that the lockdown would be extended for another 72-hours, after the country recorded an additional 11 cases, including five frontline workers who were caring for the positive cases from the Brisbane flight.

Around 63 percent of Samoa’s population is fully vaccinated, while 72 percent have received at least one dose.

Solomon Islands has seen the steepest rise in cases among the three, recording 650 positive COVID-19 cases, including 156 new cases on Tuesday alone, after 23 people on a vessel from Papua New Guinea, which entered illegally a fortnight ago, tested positive.

The government has imposed a lockdown across the capital, Honiara, warning that police will arrest and charge anyone who breaches it.

“I call on communities in Honiara to adhere to health protocols and cooperate with each other to protect our family, community and the country as we try to manage the transmission of Covid-19 in our communities,” said Police Deputy Commissioner of Operations Juanita Matanga.

Togamana warned that cases would continue to rise, with community transmission now widespread across Honiara and in some provincial areas.

Author: Joshua Mcdonald is an award-winning multimedia journalist based in Melbourne, Australia, reporting on international relations, social issues, and health across Australia, the Pacific, and South Asia.