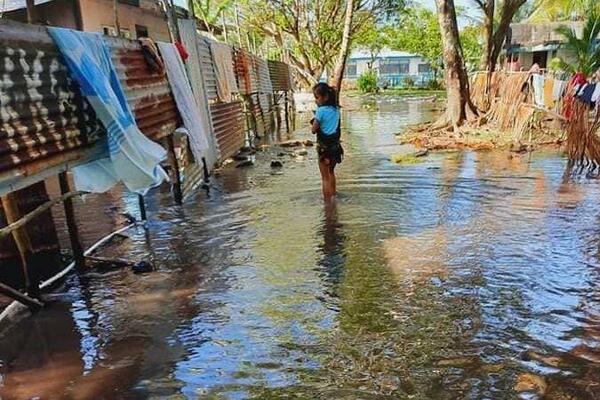 In a terrifying glimpse of things to come, this current La Nina is raising sea levels by 15-20 centimetres in some western Pacific regions – the same sea level rise projected to occur globally by 2050, regardless of how much we cut global emissions between now and then.
Source: File: RNZ
By Shayne McGregor
Share
Thursday, 16 December 2021 11:40 AM

On one level, very high tides are normal at this time of year in the western Pacific, and are known as “spring tides”. But why is the damage so bad this time? The primary reason is these nations are enduring a flooding trifecta: a combination of spring tides, climate change and La Nina.

La Nina is a natural climate phenomenon over the Pacific Ocean known for bringing wet weather, including in eastern Australia. A less-known impact is that La Niña also raises sea levels in the western tropical Pacific.

In a terrifying glimpse of things to come, this current La Nina is raising sea levels by 15-20 centimetres in some western Pacific regions – the same sea level rise projected to occur globally by 2050, regardless of how much we cut global emissions between now and then. So let’s look at this phenomena in more detail, and why we can expect more flooding over the summer.

Low-lying islands in the Pacific are considered the frontline of climate change, where sea level rise poses an existential threat that could force millions of people to find new homes in the coming decades.

Last week’s tidal floods show what will be the new normal by 2050. In the Marshall Islands, for example, waves were washing over boulder barriers, causing flooding on roads half a metre deep.

This flooding has coincided with the recent spring tides. But while there is year to year variability in the magnitude of these tides that vary from location to location, this year’s spring tides aren’t actually unusually higher than those seen in previous years.

The latest assessment report from the Intergovernmental Panel on Climate Change finds global average sea levels rose by about 20cm between 1901 and 2018.

This sea level rise would, of course, lead to more coastal inundation in low-lying regions during spring tides, like those in the western tropical Pacific. However, sea level rise increases at a relatively small rate – around 3 millimetres per year.

So, while this can create large differences over decades and longer, year to year differences are small.

This means while global mean sea level rise has likely contributed to last week’s floods, there is relatively small differences between this year and the previous few years.

This is where La Nina makes a crucial difference. We know La Nina events impact the climate of nations across the Pacific, bringing an increased chance of high rainfall and tropical cyclone landfall in some locations.

But the easterly trade winds, which blow across the Pacific Ocean from east to west, are stronger in La Nina years. This leads to a larger build up of warm water in the western Pacific.

Warm water is generally thicker than cool water (due to thermal expansion), meaning the high heat in the western equatorial Pacific and Indonesian Seas during La Nina events is often accompanied by higher sea levels.

This year is certainly no different, and maps, along with past studies, show that Pacific islands west of the date line (180⁰E) and between Fiji and the Marshall Islands (15⁰N-15⁰S) are those most at risk of high sea levels during La Niña events.

What could the future hold?

We can expect to see more coastal flooding for these western Pacific islands and atolls over the coming summer months. This is because the La Nina-induced sea level rise is normally maintained throughout this period, along with more periods with high spring tides.

Interestingly, the high sea levels related to La Nina events in the northern hemisphere tend to peak in November-December, while they do not peak in the southern hemisphere until the following February-March.

This means many western Pacific locations on both sides of the equator will experience further coastal inundation in the short term. But the severity of these impacts is likely to increase in the southern hemisphere (such as the Solomon islands, Tuvalu and Samoa) and decrease in the northern hemisphere (such as the Marshall Islands and the Federated States of Micronesia).

Looking forward towards 2050, a further 15-25cm of global average sea level rise is expected. La Niña events typically cause sea levels in these regions to rise 10-15cm above average, though some regions can bring sea levels up to 20cm.

Given the projected sea level rise in 2050 is similar to the La Nina-induced rise in the western Pacific, this current event provides an important insight into what will become “normal” inundation during spring tides.

Unfortunately, climate projections show this level of sea level rise by 2050 is all but locked in, largely due to the greenhouse gas emissions we’ve already released.

Beyond 2050, we know sea levels will continue to rise for the next several centuries, and this will largely depend on our future emissions. To give low-lying island nations a fighting chance at surviving the coming floods, all nations (including Australia) must drastically and urgently cut emissions.

This article first appeared on The Conversation on December 16th, 2021.

AUTHOR: Shayne McGregor is an Associate Professor, and Associate Investigator for the ARC Centre of Excellence for Climate Extremes, Monash University.