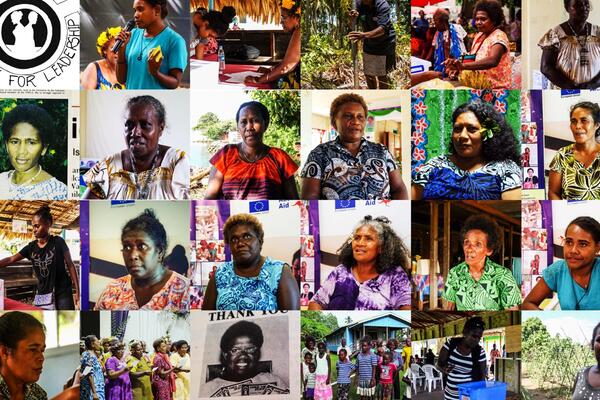 As part of International Women’s Day, the United Nations Development Programme (UNDP), the Australian Government and the European Union for the Pacific premiered online the “Outstanding Women” documentary; a special collection of interviews to celebrate the leadership of women in rural communities of Solomon Islands.

The documentary features the stories of 11 women who were nominated and chosen in community inclusive elections as Outstanding Women for their community leadership roles.

The “Outstanding Women” initiative was launched in 2019 as part of UNDP’s Strengthening the Electoral Cycle in the Solomon Islands Project Phase II (SECSIP II) to advance women’s leadership and promote gender equality in Solomon Islands. The project is being implemented by UNDP Solomon Islands with financial assistance from the Australian Government, the European Union and UNDP.

Communities throughout Solomon Islands were invited to nominate and conduct elections to choose women valued for their community leadership contributions and achievements.

Since August 2020, more than 100 Ward Outstanding Women inclusive elections have been conducted in most of the provincial governments and the Honiara City Council wards. Eleven women were later elected as Outstanding Women at the Provincial level due to the second round of elections held in each provincial headquarters and Honiara. The final elections included Provincial Assembly Premiers, Government leaders and staff, women, people with a disability, youth and men.

The initiative was implemented in all nine provinces in partnership with the Provincial Councils of Women and the Young Women Christian Association (YWCA), on behalf of the Honiara Council of Women.

The documentary, available online (https://www.youtube.com/watch?v=Y8DP5l26IBE&feature=youtu.be), is curated by SECSIP II and Outstanding Women from behind and in front of the camera.

Reflecting on the significant work of the Outstanding Women initiative, Australian High Commissioner Dr Lachlan Strahan said “Gender equality and women’s empowerment are not an option. Empowering women is both a fundamental human right and a smart thing, economically and socially. The data from around the world is absolutely clear: any society which doesn’t empower its women and girls, allowing them to reach their full potential, is impeding development and cutting economic growth.”

“The Outstanding Women recognized in this documentary are role models for everyone and play a critical part in driving social change in Solomon Islands. Australia is very proud to be part of this big team effort,” he said.

Created for International Women’s Day being celebrated around the world today, with the official theme - “Gender Equality Today for a Sustainable Tomorrow,” the documentary celebrates the stories and recognizes the contribution of Solomon Islands women and girls, who are leading the charge on climate change adaptation and response, education and youth empowerment and rights of people with disabilities to build a more sustainable future for their communities, and for the country.

Referencing the documentary, UNDP Country Manager in Solomon Islands, Mr Berdi Berdiyev, noted, “empowerment of women is central to the implementation of Agenda 2030, it is one of the sustainable goals, and it is essential for the country’s development, peace and prosperity.”

“This collaboration is about taking on the challenge of telling women’s leadership stories and showing women in all their diversity. Ultimately, it is about recognizing and appreciating the importance of women’s leadership and the immense contribution that these women make towards development of their communities and the country,” summarizes Mr Berdiyev.

With the 2030 Agenda as a guiding thread, UNDP works to advance women’s participation in civic and political life, their economic empowerment and their role as builders of peace and resilience.

The “Outstanding Women” documentary was produced by the Strengthening the Electoral Cycle in Solomon Islands Project (SECSIP). SECSIP is implemented by UNDP Solomon Islands and has received financial assistance from the Australian Government, the European Union and UNDP.

UNDP is the leading United Nations organization fighting to end the injustice of poverty, inequality, and climate change. Working with our broad network of experts and partners in 170 countries, we help nations to build integrated, lasting solutions for people and planet. Learn more at www.pacific.undp.orgor follow us on social at @UNDP_Pacific and @UNDP_Solomons.