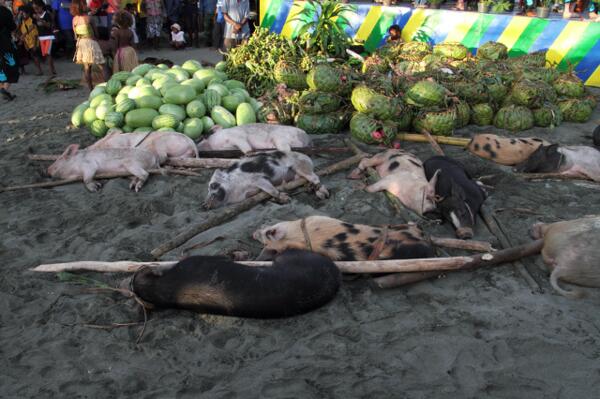 Pacific leaders should look to Guadalcanal’s system of popo and supu diplomacy as examples of how to utilise local practices to address national problems, Gordon Leua Nanau writes.

As Solomon Islands emerges from the period of civil unrest known as ‘the Tensions’ (1998–2003), and the subsequent Regional Assistance Mission to Solomon Islands (RAMSI), which ended in 2017, many within the country are looking for new ways to strengthen the state and reconcile long-held grievances.

To this end, it is becoming increasingly apparent that oft-overlooked local forms of diplomatic practice, which can be broadly classified as Oceanic diplomacy, have much to offer.

One such practice is the longstanding and effective diplomatic system that has existed between tribes, clans, and individuals in Guadalcanal, Solomon Islands, which we might call the popo and supu system. At its core are food exchanges, feasting, and presentation of valuables. These are done through crafted popo – a wooden bowl filled and decorated with cooked food – or supu – a heap of uncooked food and live pigs – with reciprocal protocols that maintain community integrity.

While the popo and supu system continues to play a significant role in managing relations between people across Guadalcanal, the Solomon Islands state has also adopted elements of the system in its efforts to resolve conflicts within the state as well as in its external diplomatic rituals.

Supu diplomacy is practised throughout Guadalcanal, although the popo option is mostly used in the Lengo region of Guadalcanal. Guadalcanal diplomacy is premised on two foundational creeds: kukuni (respect) and kininima (reverence) that ensure peaceful coexistence, compassion, and relationships. Popo and supu are two variations of presenting food and valuables epitomising a complex mix of underlying principles, values and relational affiliations founded on kukuni and kikinima.

In Lengo, supu is for lower-order and urgent events – such as compensation for swearing – while popo is a higher-order ceremony that takes time to prepare. There are events where both popo and supu are required, especially when reconciling highly charged disputes resulting in injury or death.

The importance of these diplomatic rituals is heightened, due to the understanding that in situations of maltreatment, it is not just the individual offender or victim that is affected but their entire family and clan. The threats, shame, humiliation, hardship, pain, and guilt affect members of both sides. When not resolved through popo or supu, levu ni-mate (enmity) remains and could result in paybacks, further acts of humiliation and, in extreme cases, sura (raids/tribal war).

Problems are solved and people make amends through popo and supu exchanges that herald normalcy and legitimise peace. Reconciliation in the spirit of popo and supu is to mend intra- and inter-personal relationships broken because of the neglect of kukuni and kikinima.

While this form of Oceanic diplomacy is alive in Guadalcanal, the Solomon Islands state is increasingly calling on it to resolve differences between groups, commemorate important events, build new relationships, and reinvigorate existing ones.

For example, the Solomon Islands Government has in recent years incorporated supu into official national welcoming ceremonies. This was seen in 2019 when the heir to the British throne, Prince Charles, visited Solomon Islands and was presented a supu in welcome. Likewise, in 2018 at the opening of the sixth Melanesian Arts Festival, participants from Papua New Guinea, Fiji, Vanuatu, New Caledonia, East Timor, Australia, and Taiwan were presented a supu to welcome and accept them.

Moreover, both popo and supu have been used to mark the commencement of major national projects, in order to build relationships between stakeholders and ensure cooperation.

Modern state institutions have also used these practices to reconcile conflicting parties, especially where lives and properties were destroyed. Years after the Tensions, the state reconciled with members of the Marasa community on the Weather Coast of Guadalcanal. This involved perpetrators revealing their remorse and seeking forgiveness by presenting supu, while the victims also presented supu to accept the apology. Such occasions are always two-way exchanges, as any party not reciprocating may be deemed disingenuous.

Finally, in a notable example of this diplomacy being used to reconcile both inter and intranational actors, RAMSI also used supu to successfully appease a situation where a soldier shot and killed a local community leader during a fight. Presenting a supu signifying titi ulu (absolving one’s head) to the family of the deceased, then RAMSI special coordinator Graeme Wilson said, “I assure you all of our sincere and heartfelt condolence on this sad occasion”.

The popo and supu diplomatic system always involves two-way exchanges, so parties must be identifiable and willing participants for it to be successful, especially in situations of reconciliation and compensation.

A failed attempt at such a reconciliation ceremony was seen when the national government, along with the Guadalcanal and Malaita Provinces, attempted to conduct popo and supu diplomacy at the beginning of the Tensions in 1998–99. The militants, or who they purported to represent, were never part of the ceremony; nor were they clearly identified or willing to reconcile.

In such a situation, using Oceanic diplomacy is meaningless and bound to fail. Popo and supu are acts of goodwill between people and communities and must therefore not be feigned to short-circuit genuine protocols.

When used genuinely with complete understanding, this Oceanic diplomacy becomes useful for the state. It is, however, important to value the spirit of this system before emulating it in state affairs.

These practices emphasise respect, even in situations where badly broken relationships require restoration. It is an Oceanic diplomatic practice that has withstood the test of time and is impacting modern diplomacy in Solomon Islands. It is important therefore that Pacific governments and development partners deepen their understanding of popo and supu, as well as equivalent practices found throughout the region, in order to address contemporary disputes and challenges.

This article is based upon a paper published by ANU Department of Pacific Affairs (DPA) as part of its ‘In brief’ series. The original paper can be found here.

About the Author: Dr Gordon Leua Nanau is a senior lecturer in politics and international affairs in the School of Government at the University of the South Pacific in Fiji.