How the Chinese Communist Party is Spreading Lies in Solomon Islands 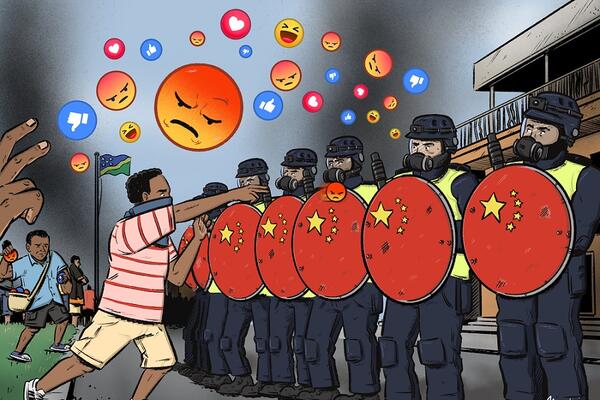 In the immediate aftermath of the Honiara riots, the CCP sought to blame Australia, the US and Taiwan for instigating the unrest. In the weeks that followed, CCP officials were also active in pushing a narrative that ‘foreign forces with ulterior motives’ were aiming to smear the relationship between Solomon Islands and China.
Source: Supplied
Share
Monday, 17 October 2022 11:05 AM

The Chinese Communist Party is attempting to influence public discourse in Solomon Islands through coordinated information operations that spread false narratives and suppress information contradictory to the party’s message.

Since November 2021 when anti-Beijing riots broke out in the Solomons capital of Honiara, the CCP has used its media and disinformation capabilities to shape public perception in Solomon Islands of security issues and foreign partners. These messages—in alignment with the CCP’s regional objectives—have a strong focus on undermining the Solomons’ existing partnerships, namely with Australia and the US.

In the immediate aftermath of the Honiara riots, the CCP sought to blame Australia, the US and Taiwan for instigating the unrest. In the weeks that followed, CCP officials were also active in pushing a narrative that ‘foreign forces with ulterior motives’ were aiming to smear the relationship between Solomon Islands and China.

After the China – Solomon Islands security agreement was leaked in late March, the CCP pushed a narrative that Australia and the US were interfering in the Solomons’ affairs; were ‘colonialist’, ‘threatening’ and ‘bullying’; and had no genuine interest in supporting the country’s development. Although this narrative wasn’t exclusively used after the security agreement was leaked, the frequency of these accusations in Chinese party-state media and official statements increased dramatically.

Some of the CCP’s messaging occurs through routine diplomatic engagement, but there’s also a coordinated effort to influence the population by amplifying the messages of particular individuals and pro-CCP content across a broad spectrum of information channels. That spectrum includes party-state media, CCP official–led publications and statements in local and social media, and official party-state Facebook groups.

There’s now growing evidence to suggest that CCP officials are actively attempting to suppress information that doesn’t align with the party-state’s narratives across the Pacific islands through the coercion of local journalists and media institutions as part of the CCP’s larger information operations.

A new ASPI report, released today, examines the level of activity and effectiveness of each of these channels of influence in the Solomon Islands information environment. This includes quantitatively measuring the degree of online penetration in social media, the level of engagement generated through online commentary, and the effectiveness in swaying public attitudes through sentiment analysis of Facebook commentary.

In doing so, we have established a baseline understanding of the CCP’s activities and influence in Solomon Islands. This aids in identifying the channels of influence that are of most concern and also enables us to detect and warn against shifts in activity levels or effectiveness across channels of influence over time.

The results varied greatly across the channels of influence. Party-state media, although useful for identifying narratives pushed by the CCP, had little impact on and penetration into the Solomon Islands online information environment. These articles, produced at a rate of one every two days, were rarely shared online and received mostly negative responses about China. Likewise, Chinese embassy Facebook posts were also limited in their penetration and engagement.

The influence channel of most concern, identified as being the most effective in propagating CCP narratives online, was the publication of CCP official–led articles in local media. This included opinion pieces, press releases and locally produced articles that were almost entirely dependent on direct quotes from CCP officials.

These publications came wrapped in the packaging of a trusted local media source and allowed the CCP to spread its message to a wider audience, resulting in greater penetration and engagement. The CCP was highly active in this area. In this case of the Honiara riots, CCP officials had almost as many statements published in local media discussing the cause of the riots as the Solomon Islands own government officials.

Our sentiment analysis of Facebook comments on these shared articles showed that the Solomon Islands online population was mostly negative towards Chinese influence and engagement. But, in the case studies examined, there was a trend of declining anti-China sentiment followed by an increase in either pro-China or anti-Western commentary. These changes in sentiment, although highly variable week-to-week, correlated with real-world attempts to influence the population—such as a message from China’s Foreign Minister Wang Yi, or a media statement criticising the United States’ announced visit to Solomon Islands. The language used by the CCP is also repeated in the commentary by Solomon Islanders.

This report is only the beginning of our attempt to understand the size and effectiveness of CCP information operations and influence in the Pacific. The CCP’s information operations in Solomon Islands are part of a broader effort to control the narrative and sway public opinion across the region, and further investigation into malign actors and activities impacting the Pacific islands’ information environment is needed. Support from the Australian government and international partners will be vital to improving understanding of the information environment in order to better combat misinformation, disinformation and propaganda.

The Australian government also needs to do more to coordinate with other foreign partners of Solomon Islands, including the US, New Zealand, Japan and the EU, to further assist local Pacific media outlets in hiring, training and retaining high-quality, professional journalists. A strong, more resilient media industry in Solomon Islands will be less vulnerable to disinformation and the pressures that may be exerted on it by local CCP officials.