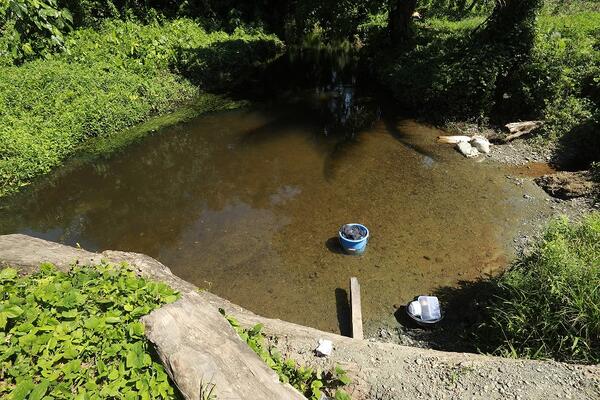 “We walked long distances to fetch water. Those were the challenges I grew up with, as a child living in the village”, Florence says.
Source: STO
By Georgina Kekea
Share
Wednesday, 09 September 2020 08:18 AM

At 15 years of age, Mary Jean says she is already tired of fetching water.

Like most rural Solomon Islanders, children like Mary are expected to share household chores, even if the chore means fetching water from rivers, streams or ground water wells that are often far away from the house.

Currently she is a standard six student at the Bola primary school.

“Usually fetching water is a chore for kids like me. We fetch water in the morning, after school and also in the evening. I remembered telling my mom I am tired of fetching water”, Mary Jean says.

Florence Boru who also comes from Bola village mused that her childhood life was also spent fetching water from the nearby stream.

Now she is a mother to a nine year old and a nine month old child.

“We walked long distances to fetch water. Those were the challenges I grew up with, as a child living in the village”, Florence says.

Bola village was developed seventy years ago. The community is about 4 hours truck ride from Honiara.

Since its establishment, members of the community usually access rivers for washing of dishes and clothes, bathing as well as for drinking purposes.

“It was only recently we were provided with water tanks through the CRISP project”, Florence says.

The development objective of the Community Resilience to Climate and Disaster Risks Project (CRISP) in Solomon Islands is to build the resilience of selected rural vulnerable communities to manage climate change and disaster risks.

This in turn will lead to resilient and sustainable communities that are able to respond to the extreme vulnerability and effects of climate change and natural hazards.

Bola village was selected after a Community Vulnerability and Risk Management Assessment Planning Process (CVRM) was carried out by CRISP in the community.

As such, CRISP funded rain water harvesting water supply consisting of 5000 litres water tanks in building the resilience of Bola Community within the water sector resulting in improved health and livelihoods.

“Now I am happy as I do not have to walk far to fetch water”, Mary Jean says.
The water tanks installed are shared by households. Since there is not enough water to support the number of people in the household using one tank, the villagers have to preserve the tank for cooking and drinking only so the water will last longer.

“So far the system has worked well for us”, Margaret Gina also another resident of Bola village says.

“We try as much as possible not to misuse the water we have because once the tank runs out of water, we will have to revert back to the old way of doing things”, Margaret says.

Margaret’s husband, John, is a teacher at the Bola primary school.

“So far we are blessed to have good rainfall, thus we never really had any issue yet with water shortages”, John says.

“I am almost an old woman now before I see the installation of water tanks in our village”, Florence says.

Meanwhile Mary Jean says she wished a water tank is also installed in the school compound for the students.

She revealed that most times the students were not made welcome to drink from the water tanks provided in the community.

“The owners of the house where the tanks are located say we will spoil their ration of water”, Mary Jean says.

The allocation of water tanks per household was done by the community members.

“Should CRISP continue its work in Guadalcanal, I wish for it to support us in sanitation. Right now even the school does not have proper sanitation”, John Gina of the Bola school says.

Solomon Islands was reported to have the highest rates of open defecation in the Pacific, at 33 percent.

According to the CVRM carried out by CRISP, the community of Balo is still experiencing major problems with sanitation where people still practice open defecation.

The Community Vulnerability Risk Management Process (CVRM) done at Balo is an initiative under the Ministry of Environment, Climate Change, Disaster Management and Meteorology (MECDM).

It is an integrated approach that builds on the principle of risk resilience tools and processes for enhancing climate change adaptation, disaster risk reduction and environmental management at community level. This initiative has been implemented through partnership with the CRISP Project.