“Every High Tide Reaches My Doorstep”: How People with Disabilities Face Climate Change in Solomon Islands 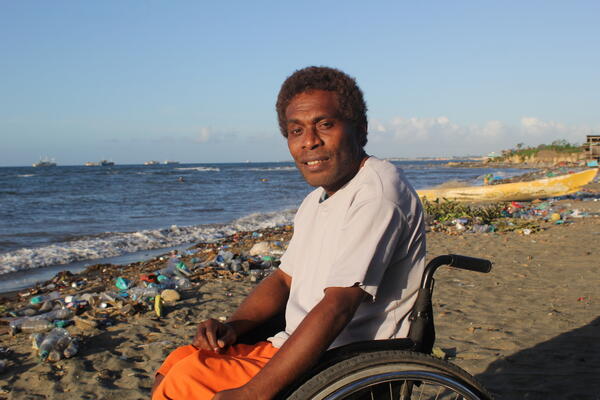 35-year-old Francis Filia has had to sit in a wheelchair for more than 17 years of his life, due to a physical impairment on his spine. From his home in the Solomon Islands, he hears the waves each morning getting more aggressive.

Honiara, the capital city of Solomon Islands, is an example of how people with disabilities are left to face the difficulties in tackling climate change, without any additional support.

"Every high tide is right at my doorstep every time I wake up. That keeps me wondering if soon, we are going to sink in the sea with no option,” he said.

The government’s climate plans are not listening to the realities of people with disabilities, said Casper Joseph Fa’asala, the People with Disability Solomon Islands Office Manager. Resettlement, Livelihood and Longlife skills are the important areas that were lacking in addressing in terms of access to the services.

This does not reflect the vision of the Pacific Framework for the Rights of Persons with Disabilities, which aims to build “an inclusive, barrier-free, and rights-based society for men, women and children with disabilities, which embraces the diversity of all Pacific people.” Solomon Islands is still yet to ratify this treaty.

Now, as climate impacts become more extreme —such as increased coastal flooding and rising sea levels—, people with disabilities have to face these events with even more vulnerabilities.

There is a huge risk that in all climate emergencies that the People with Disabilities will disproportionately be affected by climate change because of their inherent vulnerabilities, limited access to knowledge, resources and sufficient access to most essential services to effectively respond to the current environmental change that is currently taking a toll in many communities in the Solomon Islands.

The UN’s High Commissioner for Human Rights Office recommends the inclusion of people with disabilities in the planning for “disaster risk management and climate-related decision-making at the local, national, regional and global levels”.

Francis has lived most of his life by the sea. He recalled his childhood memories with happiness, but said that home now is nothing like what it was before.

Climate impacts have already become visible near his home, as a “huge” land mass was washed off by the sea recently, he said. This affected six homes, access to roads and a well-known recreational site in his community, he added.

“All of these places are now under water and today the sea is just a few meters away from reaching my home,” Francis said.

The changes have been challenging for him. “I cannot wheel myself out if the tide is very big because I fear that the waves would get me off the beach and push me out.”

His community’s geographic location also adds to the impacts. From being coastal, the settlement is also close to a river bank, a feature that gave it its name, Mamana Water which means ‘Among Water.’

“During rainy seasons and cyclones I could not go outside because the running banks of Mataniko river would add another level to the sea,” he recalled.

Cyclone events leave most of his belongings floating or drenched with water, he says. His efforts to keep them dry were unsuccessful.

“Sea level rise is affecting our homes and lives. Eventually with the limited time my house that I call home will be washed out in the sea. I believe relocation is another option but when and where will still be another challenge for me and my family,” Francis explained.

Almost 20% of the people with disabilities in Solomon Islands are affected by climate change impacts such as flooding, cyclone, sea level rise and sanitation, said Faásala.

“Their voices need to be heard, especially for those in vulnerable situations. It must not fall on deaf ears. People with disabilities also have a right to life, right to health, to development and empowerment,” said Caleb Pollard, climate activist and president of the youth movement Pacific Islands Students Fighting Climate Change.

In Honiara, there are 122 disability people living with their own challenges surrounding climate change, according to People with Disability Solomon Islands (PWDSI).

The Climate Change Officer for the People with Disability in the Solomon Islands, Melvina Voua, said her office does not have the power to influence all decision makers in terms of climate action plans to help people with disability.

“We have come to a point where we see the right of being inclusive is slim and we cannot accept the fact we are expected to do the same as normal people.” said Voua.

Another barrier for action is information. The majority of people with disabilities in Honiara lack information about climate change, said Voua.

Francis Filia recently passed away, by sharing his story we do hope that it gives an insight into the plight of people with disability, something good in the sadness and pain of losing someone that was loved and cared for by many.