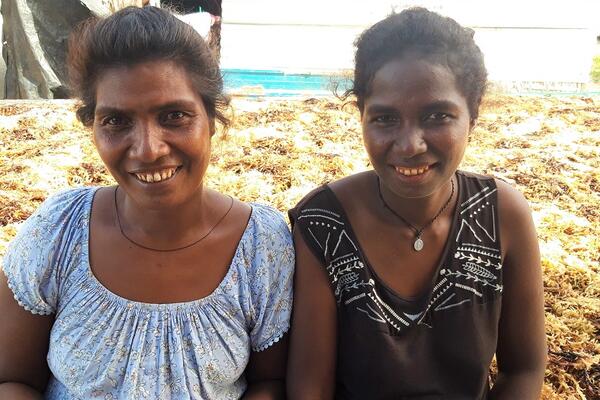 Kurisi and Kamaki come from Choiseul province and are currently settlers on the island of Peniamina, just outside of Wagina.

Just recently, for fear of COVID-19, Kurisi returned to Peniamina, an island popular for seaweed farming in that part of region.

Kamaki on the other hand has been living on Peniamina for quite some time now.

Most of their time is spent on the island where they concentrate on helping their husbands in the seaweed business.

"But we don't know how to look after our money because most of us here on the island do not go to school", Kurisi chides in.

The island of Peniamina is well known for seaweed farming. In the past, farmers usually traveled from surrounding islands including Wagina to do their farming on the island.

"We have seaweed buyers here on the island. They also ran canteens. So the practice here is that we usually get goods on credit from their canteens. They will keep a record of our credit. When we bring our seaweed to them, they will take out whatever we owe them and then the rest they will give us in cash", Kurisi and Kamaki say.

“We just stay here on the island. We go to the big island maybe once a week or when needed only”, they say.

Most of the monies earned from seaweed go towards their daily necessities as well as needed materials for their seaweed farm. They were not able to keep track of their expenses and take each day in their stride as it unfolds.

“We do not have access to banks nor any financial institutions or support”, Kurisi says.

She says financial literacy is what she desires.

“Maybe then we would be able to know how to look after our money. Now we just spend without really understanding where our monies are being spent. Come to think of it, we earn big money from seaweed” she says.

For those living in a rural area without any big underlying cost, this is quite a good sum of money. However the lack of financial literacy has always been an issue that deters these rural dwellers from saving monies earned from their activity.

Under the CBSI Act 2012 NFIU was established in 2011 to promote financial inclusion in Solomon Islands. Its secondary role is to act as a secretariat office for the National Financial Inclusion Taskforce (NFIT), a body approved under Cabinet to act as an oversight agent in the implementation of the financial inclusion medium term national action plan (2011 -2015) and the National Financial Inclusion Strategy NFIS –II (2016 – 2020).

Meanwhile the former Governor of CBSI, Denton Rarawa says bringing financial literacy to the rural areas of Solomon Islands is the main goal of the strategy.

“Not the whole of Solomon Islands are being covered yet but the objective of getting our people to be financially literate and then become financially competent to make decisions about financial matters is an important pillar in that strategy”, Rarawa says.

He says financial literacy is a huge need for the country.

“So that people will know what to spend their money on, how they spend it, it is quite important”, he says.

The i-Kiribati people of Wagina boast the biggest export of seaweed from Solomon Islands.