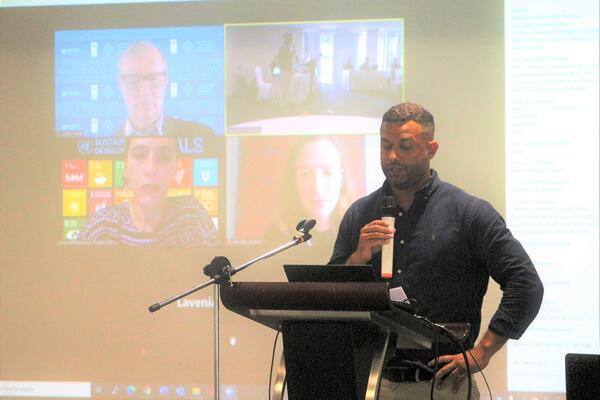 SICCI Board Chairman, Jay Bartlett, says corruption is a difficult and long-term challenge for Solomon Islands and an urgent one that needs to be addressed.
Source: SICCI Media
By Philip Lilomo, Media & Communications Officer (SICCI)
Share
Friday, 13 November 2020 10:31 AM

The Solomon Islands Chamber of Commerce and Industry (SICCI) recognise that corruption is a difficult and long-term challenge, but it is also an urgent one that needs to be addressed.

Board Chairman of the Solomon Islands Chamber of Commerce and Industry (SICCI), Mr Jay Bartlett, made the statement at the opening of a two-day Business Integrity Workshop on Thursday 12 October hosted by the UN Pacific Regional Anti-Corruption (UN-PRAC) Project and UNDP in partnership with SICCI.

Mr Bartlett highlighted that what should be of concern for Solomon Islands is the fact that corruption does not allow the local economy to create jobs for the country’s growing population.

“Finding employment opportunities for young people is a major challenge for the country, with approximately 10,000 young people entering the labour market each year, far surpassing the number of jobs and opportunities available,” he said.

Corruption is also one of the disincentives for foreign investment.

“Investors who seek a fair, competitive business environment will avoid investing in countries where there is a high level of corruption.

“While investing in emerging markets remains a popular investment area, investors are naturally hesitant to put their money at risk in countries known to have high corruption levels,” Mr Bartlett said.

Studies show a direct link between the level of corruption in a country and measurements of the competitiveness of its business environment.

Mr Bartlett said: “Today if we are to be brutally honest with ourselves, our entire society is affected as a result of the inefficient allocation of resources, the presence of a shadow economy, and low-quality education and healthcare.

“Corruption has made our society worse off and has lowered the living standard of most of our populations.”

According to the latest World Bank annual ratings, Solomon Islands is ranked 136 among 190 economies in the ease of doing business.

This Ease of doing business index ranks countries against each other based on how the regulatory environment is conducive to business operation and stronger protections of property rights. Economies with a high rank (1 to 20) have simpler and more friendly regulations for businesses. Solomon Islands ranking fell to 136 in 2019 from 115 in 2018.

Consultations with SICCI members, as part of a Private Sector Scan report commissioned in 2017, identified a broad range issues impacting upon the private sector and its capacity to support development in the Solomon Islands.

A large majority of SICCI members consulted identified corruption as one of the biggest issues impacting upon business in Solomon Islands.

One member highlighted that corruption was the single biggest competitive cost impacting upon their ability to run a profitable business.

Studies have also shown that countries that have a high level of corruption are unable to function efficiently or prosper at an economic level, causing suffering for society as a whole.

Mr Bartlett said corruption can lead to an uneven distribution of wealth as a there is a lack of a level playing field between companies that have established illegal connections with Government officials.

“In a corrupt economy, resources are inefficiently allocated and companies that otherwise would not be qualified to win Government contracts are often awarded projects as a result of bribery or kickbacks.

“The quality of infrastructure, education and healthcare also deteriorates under a corrupt economy, leading to an overall lower standard of living for the country's citizens,” the SICCI Chair said.

SICCI represents the voice of business and plays a key role in harmonizing, advocating and elevating issues of key concern to the private sector.

“I believe beyond our mandated role we also represent an emerging cohort in leadership, thinking and innovation,” Chairman, Mr Bartlett, said.

“As organisation that is funded though memberships fees and Donor funds, integrity and high levels of Governance has always been front and centre of our leadership and team culture. Our members are our shareholders and the onus is on us to manage the funds they have invested in us,” he said.

He says for Solomon Islands as a country, Good Governance and Integrity are fundamental principles for future success.