Commonwealth Day 2022: Our Unity is Our Strength 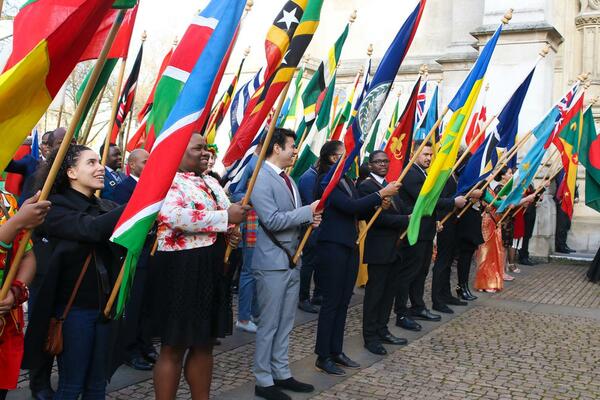 More than 1,500 guests of honour including senior politicians, High Commissioners, Ambassadors, dignitaries from across the UK and Commonwealth, faith leaders, and over 600 schoolchildren and young people, were in attendance.
Source: Supplied
Share
Tuesday, 15 March 2022 09:04 AM

Royal Family, Government representatives and dignitaries gather in London for the annual commemorative service at Westminster Abbey and Marlborough House.

People of all ages and backgrounds from the 54 countries that make up the Commonwealth of Nations came together under one flag today (14 March 2022) to commemorate Commonwealth Day.

Observed on the second Monday in March each year, Commonwealth Day is an opportunity to promote the strong unity, diversity, and shared values of the Commonwealth family and is celebrated by people across the world – in Africa, Asia, the Americas, Europe, and the Pacific - through a wide range of activities and events including flag-raising ceremonies, church services, school activities, and much more.

In her annual Commonwealth Day message, the Secretary-General of the Commonwealth, The Rt Hon Patricia Scotland QC said:

“After the change and challenge of the past two years it is fitting that, in such a momentous year for the Commonwealth, we are back together as a family to celebrate our special day. Most especially, in this year of Her Majesty’s Platinum Jubilee, we value the opportunity to pay tribute to her unparalleled service.

Today, as we have done for many years, we renew the values that bind us, enshrined in our charter, of democracy; peace; human rights; equality; tolerance, respect and understanding; stewardship; promotion of youth and protection of the vulnerable. We celebrate the diversity that enriches us, and the similarities that enable us to work together.”

This year’s Commonwealth Day also marks the start of the Commonwealth’s celebrations for Her Majesty The Queen’s Platinum Jubilee – marking her 70 years of service and commitment to the people of the United Kingdom and the Commonwealth. To celebrate Her Majesty’s historic milestone, a special focus was placed on the role that public service plays in the lives of people and communities across the Commonwealth.

In her Commonwealth Day message, Her Majesty The Queen said:

“In this year of my Platinum Jubilee, it has given me pleasure to renew the promise I made in 1947, that my life will always be devoted in service. Today, it is rewarding to observe a modem, vibrant and connected Commonwealth that combines a wealth of history and tradition with the great social, cultural and technological advances of our time. That the Commonwealth stands ever taller is a credit to all who have been involved.

And on this special day for our family — in a year that will include the Commonwealth Heads of Government Meeting and the Commonwealth Games — I hope we can deepen our resolve to support and serve one another, and endeavour to ensure the Commonwealth remains an influential force for good in our world for many generations to come.”

In London, commemorations began with a wreath-laying ceremony at the Commonwealth Memorial Gates, an annual ceremony honouring the five million men and women from Africa, the Caribbean and the Indian subcontinent who volunteered to serve with the Armed Forces during the First World War and Second World War.

This was then followed by a special service at Westminster Abbey in the presence of Members of the Royal Family led by His Royal Highness The Prince of Wales, The Duchess of Cornwall, and The Duke and Duchess of Cambridge. More than 1,500 guests of honour including senior politicians, High Commissioners, Ambassadors, dignitaries from across the UK and Commonwealth, faith leaders, and over 600 schoolchildren and young people, were in attendance.

The service featured performances by Mica Paris, Members of the Whānau London Voices, Emeli Sandé and the London African Gospel Choir, and a collaboration between celebrated poet Imtiaz Dharker and sitarist Jasdeep Singh Degun. Elizabeth Kite, from Tonga, also spoke about how the Commonwealth family stepped forward to help Tonga following the devastating undersea volcanic eruption on 15 January 2022. The service concluded with a reading of the Commonwealth Affirmation by the Commonwealth Secretary-General, blessings from faith leaders, and a procession of Commonwealth flags.

Organised by The Royal Commonwealth Society, the Service is the largest annual inter-faith gathering in the United Kingdom in celebration of Her Majesty's lifetime commitment to the Commonwealth. The service was broadcast live on BBC One and on the BBC YouTube channel allowing more people from the UK and across the Commonwealth to join in the celebrations.

Following the service, His Royal Highness The Prince of Wales attended the annual Commonwealth Day reception held at Marlborough House, the Commonwealth Secretariat’s headquarters in London.

Guests at the reception celebrated the work of the Commonwealth and were treated to entertainment from Rwanda, Cyprus, Pakistan and the Caribbean.

This year, Commonwealth Day was observed under the theme, Delivering a Common Future, the same theme for the upcoming Commonwealth Heads of Government Meeting (CHOGM), scheduled to take place in Rwanda from 20 – 24 June 2022. The theme highlights how the 54 Commonwealth countries are ‘innovating, connecting, and transforming’ to help achieve priority goals such as tackling climate change, promoting good governance, achieving gender equality, and boosting trade.