Climate Change: Now is Not the Time to Mince Words 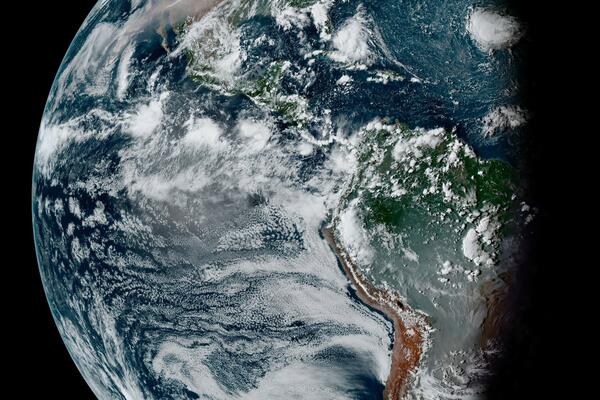 Waning gibbous Earth taken by the GOES-16 satellite on Sept. 11, 2020. Smoke from fires in the Amazon and Pantanal of Brazil dominates South America. A vast vector of smoke expands across North America and the Pacific from West Coast wildfires.
Source: Michael Benson/CIRA/NOAA
By U.S. Ambassador to Papua New Guinea, Solomon Islands, and Vanuatu Erin E. McKee
Share
Thursday, 25 February 2021 09:15 AM

There is no greater long-term challenge confronting the United States and the world than climate change.

The progress we make in the United States is crucial. At the same time, with more than 85% of global emissions coming from beyond our borders, we need the rest of the world to accelerate their progress alongside us.

President Biden has made clear he intends to make climate change a top priority. As a first but significant step, on January 20, he signed the instrument to rejoin the Paris Agreement and the U.S. again became a Party on February 19th.

The Paris Agreement creates an unprecedented framework for global action to avoid potentially catastrophic planetary warming, while building global resilience to the climate impacts we are already experiencing. The United States was instrumental in achieving the Agreement, and we will again exercise global leadership in addressing the climate crisis.

Three years ago, scientists starkly warned us that we had twelve years in which to make decisions to avoid the worst consequences of the climate crisis. Now, already, we are down to just nine years left. And we are into the decisive decade for action and the evidence of urgency is literally all around us.

President Biden understands the critical role the United States must play in the global climate effort. He has created the new position of Special Presidential Envoy for Climate to emphasize the importance he attaches to the issue and the central role that climate change plays in U.S. foreign policy and national security and has named former Secretary of State John Kerry to fulfill that role. Secretary Kerry will waste no time reengaging the global community on tackling this shared challenge.

And there in plain sight was the result of a disaster so vast that it had already consumed fifteen million acres, a figure that would rise to 46 million. In the end Australia’s fires killed dozens of people, destroyed 5,900 buildings and, according to the best science, quite likely rendered some of the country’s endangered species extinct. Benson summed it up, “With shocking iconographic precision, that unfurling banner of smoke said, ‘The war has started, we’re losing.’”

With the United States Agency for International Development (USAID) in the lead, the U.S. government has taken a multi-pronged approach to working with PNG to build capacity, develop sustainable solutions, and foster the resilience needed to overcome environmental insecurity.

One is Oceans and Fisheries Partnership, a partnership between USAID, the Southeast Asian Fisheries Development Center, and the Coral Triangle for Coral Reefs, Fisheries and Food Security, works to strengthen regional cooperation. We cooperate to combat illegal, unreported and unregulated fishing, promote sustainable fisheries, and conserve marine biodiversity across the Indo-Pacific.

In addition, over the last several years we have supported efforts to build prosperity and educate the next generation through USAID’s Pacific-American Climate Fund, which awards grants to organizations in Pacific countries to support communities as they adapt to the impacts of climate change.

These programs will bring enormous reward in countless measures – and we are continuing to look at even more options. The argument that deniers and procrastinators have made -- that this is a choice between preserving a certain quality of life or actually taking care of this challenge – is over. Success means tapping into the best of global ingenuity, creativity, and diplomacy, and working together to implement solutions. From brain power to alternative energy power, using every tool we have available will be necessary to secure our planet’s survival. The evidence is clear: A zero emissions future offers remarkable opportunity for business, for clean, green jobs, for economic growth. That evidence, to use the President’s words, has laid the foundation for us all to ‘build back better’ from the global economic crisis, to win the war against climate change, and preserve our planet for the future.