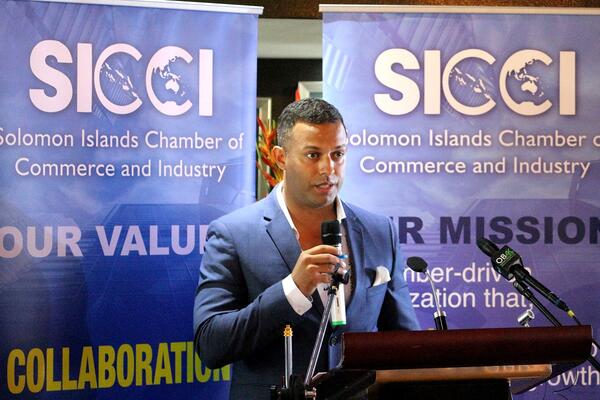 “Change takes time and effort. Youthful enthusiasm is a wonderful thing although I have learnt quickly that influencing policy, legislation and other established societal structures is at best very slow and maybe slow."
Source: Supplied
Share
Tuesday, 06 April 2021 10:12 AM

“Don’t wait for others to drive the change: A lot of people have ideas, a lot of people will come up and give great advice or will criticize you for not doing enough on a certain issue, but not a lot of people are really prepared to do the actual work.”

These were the departing words from Mr. Jay Bartlett to the newly elected Board of the Solomon Islands Chamber of Commerce and Industry (SICCI) after stepping down from the Chairmanship position during the Chamber’s Annual General Meeting (AGM) on Wednesday 24th March, 2021.

Jay, who is the Managing Director of Hatanga Ltd, was the longest serving Chairman of SICCI.

When he first took up the responsibility, as a young emerging leader he found himself in the deep end without much support or direction, “it was sink or swim some days,” he says.

Now with the benefit of hindsight, Jay shares his reflection on the change the Chamber of Commerce has gone through in becoming a unified sector voice with strong advocacy to the interest of businesses and the national economy.

“Change takes time and effort. Youthful enthusiasm is a wonderful thing although I have learnt quickly that influencing policy, legislation and other established societal structures is at best very slow and maybe slow.

As Jay has found out, there is no substitute for hard work.

“Its hard work, it needs consistency and many times it was a struggle to drive and influence the changes we want to see.

“Do not be disheartened even with minimal change instead acknowledge slightest of changes as achievements to work upon,” he said.

For members of the SICCI Board unlike many other Boards, it is particularly hard work due to the fact that they will not be financially rewarded for the amount of effort put in as Board Members.

Jay reminded the new SICCI Board to be prepared for disappointment but also not to give up.

“Be prepared for disappointment as they will come thick and fast and in as many forms.

“Mine particularly, was results and outcome based as I still struggle with the disparity between our efforts and gains. Never give up, do not take it personally and remain focused on task at hand.

“Reality is, the true beneficiaries of our efforts will be realised well after our time is done but we must do it anyway for our sons and daughters.

Jay thanked both present and past SICCI members and Boards for giving him the valuable opportunity to participate both as a team player and team Leader to SICCI.

When he started serving with the Board more than six years ago, the Chamber of Commerce was in a dire situation.

“I was Vice Chair when the then Chairman resigned, the Chief Executive Officer (CEO) resigned two days later and at that stage we only had a few dollars in the bank account,” Jay recalled.

As a young Solomon Islander with a genuine vision to develop the country’s private sector, Jay’s immediate priority was to update the SICCI constitution and improved the Board’s Governance.

“We have stabilised the leadership in the Secretariat and developed a strong Secretariat team.

“As an organisation we strengthened our internal systems and processes that enabled us to secure and maintain funding that has provided financial stability for the interim period. I am proud that our reporting is considered the gold standard,” Jay said.

Under his leadership SICCI have developed a well-articulated strategy that takes the Chamber into 2023 and have maintained a good working relationship with Government under a signed Memorandum of Understanding (MoU).

Signing the MoU in 2017 was one of the biggest achievements for Jay in enabling SICCI to become the only Chamber in the Pacific to have a formal MoU with its Government.

The MoU establishes a formal and structured public private dialogue mechanism to allow the private sector and Government to arrive at an agreed position on reform priorities and to develop innovative solutions and policies that are in step with the ever changing domestic, regional and global landscape.

“I believe SICCI remains a crucial voice in our community and more and more when I walk around, I am asked about the Chamber of Commerce,” he said.

For the Chamber, Government remains a key stakeholder as continuous collaboration and engagement is critical to working towards a conducive business environment where the private sector can grow and jobs are created for our growing population.

As Chairman, Jay has had the privilege to work with three Prime Ministers and their respective Governments.

“It has been an honour to develop an excellent working relationship with Hon Sogavare's leadership.

“In particular, I have gained from him the importance of steadfast meaningful interaction with the next generational leadership. His time in listening and responding to our calls has had a profound effect,” he said.

Jay acknowledges that the Prime Minister’s role as leader of a nation, has at times been unbearable with pressing matters, however, Hon Sogavare has never let the Chamber down.

“I firmly believe that our mutual respect has seen much forward progress between his Government and the Business Community at large,” he said.

Jay said his tenure as Chair can be summarized as educational and challenging, however, insisted that it is the business members of SICCI that have made this journey in leadership rewarding.

“I depart with my very best wishes to SICCI and I sincerely trust it is in very good hands which we must all continue to afford them the support as you have done for me.

“My departing words of encouragement to the new Board from me and all those that have come before us, is also a reminder that this responsibility will test your resolve however you must stand ready and stand strong.

“Do not let the long chain of striving for a better future end with you.”

While assuring his continuous support towards the Chamber, Jay now looks forward to embark on the most important leadership role in life and that is being the best father to his one-year-old daughter, Aria.

Jay is replaced by another young Solomon Islander, Mr. Ricky Fuo’o as Chairman of SICCI.

Mr. Fuo’o, who is the General Manager of Tropic Group Builders (TGB), was Vice Chairman before standing unopposed for the Chairmanship position during the SICCI AGM and Board election in March.

After graduating from University, Ricky started off his career by helping out his father Justin Fuo’o in their family business Tropic Glass and Aluminium (TGA). In 2017 he became the General Manager of TGA and was given managing authority over sister company Tropic Group Builders (TGB).