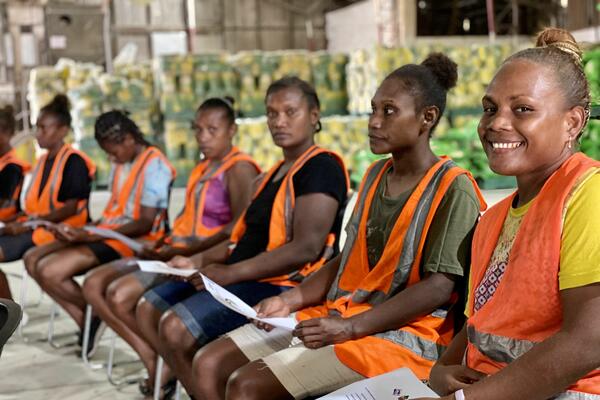 The UN Development Programme, SolRice, and the Government of Australia have joined forces to acknowledge women’s leadership and their role in achieving social change.

85,000 copies of the Outstanding Women (OW) of Solomon Islands booklet has been distributed through SolRice - one of the country’s largest rice distributors.

The “Outstanding Women” initiative was launched in 2019 as part of UNDP’s Strengthening the Electoral Cycle in the Solomon Islands Project (SECSIP) to advance women’s leadership and promote gender equality in Solomon Islands.

Communities throughout Solomon Islands were invited to nominate and conduct elections to choose women valued for their contributions and achievements.

The names of 120 women nominated may be found in this booklet which features the stories of 11 women who received the highest number of votes in nine provinces, including the capital Honiara.

During a press briefing on the launch of the Outstanding Women booklet and the SolRice distribution partnership, the Australian High Commissioner, Dr Lachlan Strahan, highlighted the significance of working together with the private sector in promoting women’s roles as leaders in Solomon Islands. “Gender equality and women’s empowerment is not an option,” said Dr Strahan. “All the data from across the globe indicates that any society that does not empower women, economically, socially and politically, struggles.”

Dr Strahan said, “Empowering women is the right thing to do because it’s about fundamental human rights, it’s also the smart thing to do.”

“The Outstanding Women recognized in this booklet act as role models and play a catalyzing role driving social change,” said Dr Strahan. “Australia is very proud to be part of this big team effort for social change.”

Echoing the same sentiments, Mr James Bradford, the SolRice General Manager said, “Gender equality is a core principle of SolRice. We are committed to supporting and promoting women’s role in Solomon Island communities. We are happy to partner with UNDP to distribute the “Outstanding Women” booklets because when business and international organizations work together, the outcome is much faster.

Emphasizing the importance of teamwork, Mr Berdi Berdiyev, UNDP Country Manager said, “This is the third time SolRice works with UNDP on a pro-bono basis to implement civic engagement initiatives. It is an example of what can be achieved when national authorities, civil society, development partners and socially committed companies, such as SolRice, work together.”

“I would also like to thank the SOLRIGHT Women Football team who has assisted in the packing and adhering of the booklets to the bags of rice. This team effort will help not only spread the word on the “Outstanding Women” initiative but also advance gender equality in Solomon Islands,” Mr Berdi Berdiyev concluded.

With the 2030 Agenda as a guiding thread, UNDP works to advance women’s participation in civic and political life, their economic empowerment and their role as builders of peace and resilience.

The ongoing dissemination of the “Outstanding Women” booklet and the accompanying press briefing were organized by the Strengthening the Electoral Cycle in Solomon Islands Project (SECSIP). SECSIP is implemented by UNDP Solomon Islands and has received financial assistance from the Australian Government, the European Union and UNDP.