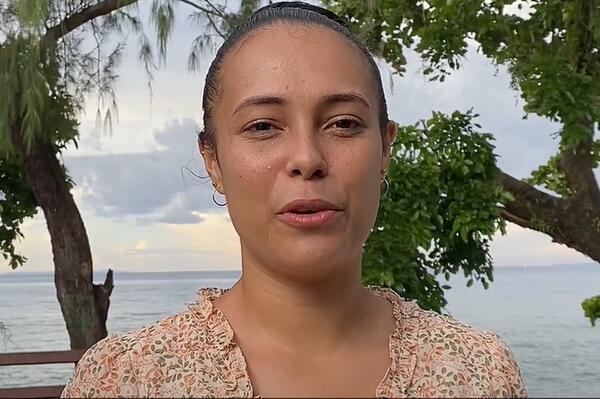 "We need to take urgent action now by acknowledging it as a serious threat to our islands,” Gladys told Pacific leaders that consisted of Prime Ministers, Presidents and Ministers.
Source: YouTube
By Georgina Kekea
Share
Friday, 23 July 2021 08:39 AM

Pacific Youth representative at a UK-Pacific High Level Climate Dialogue, Gladys Habu is calling on Pacific Leaders to prioritize the climate crisis by declaring it a climate emergency.

As a guest speaker for the session called the ‘Voice of today and tomorrow’, Gladys urged climate leaders to step up climate action and to take it seriously.

“I am calling on each respective Pacific Island country to prioritise the climate crisis by declaring it a climate emergency. This declaration will be symbolic of your national commitment to my generation. If we claim this climate crisis is costing us our future. We need to take urgent action now by acknowledging it as a serious threat to our islands” Gladys told Pacific leaders that consisted of Prime Ministers, Presidents and Ministers.

For low lying islands in the pacific, every fraction of additional warming above 1.5°C will bring worsening impacts, threaten lives, food sources, livelihoods and economies.

This threat for Solomon Islands was more evident when in 2016 it was reported that five islands were submerged under saltwater, due to sea level rise.

The island of Kale in Isabel province to which Gladys is known for her story was one of the five islands. Kale Island used to be the home of Gladys’s grandparents. It later became a picnic island for the family before being submerged completely under sea water.

The loss of the island had inspired Gladys to focus on climate advocacy work.

The UK will be the host for this year’s world's biggest climate change meeting, COP26.

With Pacific countries at the frontline of the impacts of climate change, the Pacific leaders are expected to play a crucial role in framing the agenda for COP26. This is to drive more ambitious action from the world’s biggest emitting countries.

At the UK-Pacific High Level Climate Dialogue, the Pacific leaders outlined the devastating impacts of climate change, a phenomenon not of their creation but has impacted much on the livelihoods of pacific people.

They urged developed countries around the world to curb emissions and limit global warming to 1.5°C.

The Pacific leaders also called for COP26 to deliver a step-up in finance for Small Island Developing States both in mitigation and adaptation action. The importance of ocean issues in climate negotiations was also raised in the dialogue.

The COP26 President, Alok Sharma, reaffirmed his commitment to an inclusive COP26 that delivers for the most climate-vulnerable countries, including those across the Pacific.

The COP26 summit will bring parties together to accelerate action towards the goals of the Paris Agreement and the UN Framework Convention on Climate Change.

The United Kingdom is committing itself to work with all countries and joining forces with civil society, companies and people on the frontline of climate change to inspire climate action ahead of COP26.

The Pacific Youth Representative at the UK-Pacific High Level Climate Dialogue, Ms. Gladys Habu, thanked the COP26 President for bringing the Pacific together in this significant discussion and for expressing UK’s commitment to ensuring the Pacific voice is heard in Glasgow later this year and beyond.