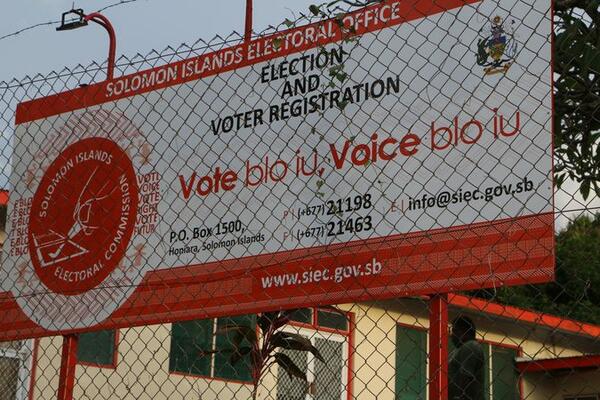 A total of 26 women stood as candidates at the 2019 Solomon Islands national general election and, for the first time since independence, two women won seats in the national parliament.

While this could be perceived as a positive development, it is clear that women remain poorly represented in national politics. Baker has provided a detailed overview of women’s candidacy and their competitiveness at the 2019 election.

Recent legislation that creates incentives for political parties to endorse women candidates has had limited success to date.

The Political Parties Integrity Act 2014 introduced a number of reforms aimed at strengthening political parties, including specific measures relating to women’s political participation. In particular, it allows for the provision of a ‘special measures grant’ to any political party that supports the election of a woman into parliament.

The Act also requires political parties to ‘reserve for women at least ten per cent of the total number of candidates it selects and endorses to contest an election’ (s. 48(1)).

In cases where political parties receive less than 10 per cent of applications from women, however, they become exempt from the need to reserve any places for women. In practice, this caveat means that political parties can easily sidestep the requirement to recruit more women.

Despite encouraging more women to become officially endorsed by a political party, the Act has not had an impact on the overall number of women contesting national elections, which has remained similar to previous elections.

Voter perceptions of women in politics

Surveys conducted during the election observation recorded citizens’ attitudes towards women candidates. Three-quarters of respondents believed that there should be more women members of parliament (MPs), but only half said that they would vote for a woman candidate.

There was very little separating men and women when responses to these questions were disaggregated by gender. These findings indicate that, at least in the abstract, most men and women claim to be open to the idea of more women in parliament.

When respondents said that they would vote for a woman candidate, they often qualified their answer, adding that the woman would have to be a very capable candidate to receive their vote. Many respondents also made references to gender roles that emphasised politics as men’s business.

Citizens who said that they would not vote for a woman candidate often justified their response by pointing to the importance of women’s contributions to the family or local community in less public ways. As one observer summarised:

"People often say that women exert their influence through ‘pillow talk’ and via more subtle ways of influencing their husbands or other male family members who are more likely to speak out loud during community gatherings."

The RAMSI People’s Survey consistently found that the overwhelming majority of both men and women answered that they would vote for a good woman candidate and that there should be more women MPs.

These surveys also found that the most common explanation given by respondents for women’s under-representation had to do with the strong associations between men, masculinity and political leadership.

Observers attending campaign events noted that the treatment of male and female candidates differed. In general, observers thought that women candidates received harsher treatment than their male counterparts. For example an observer in the constituency of Maringe/Kokota heard that supporters of another candidate blocked a woman candidate from campaigning on a number of occasions.

Her campaign in several locations was met with hostility, and transportation providers were said to have increased their prices when her campaign team needed to use their services. In another constituency, an observer attending a woman candidate’s rally commented on how the crowd received her presentation noting;

"you could sense that people were not taking her seriously … for men candidates it is more quiet and very serious".

Our observers were also asked to record the role that women played during campaign rallies and in providing general campaign support. Our research shows that the two main ways that women contributed to campaigns was through cooking food and providing hospitality for events. There were only some cases where women took a more public role in campaigning, such as speaking at election rallies and conducting voter education.

Men predominantly occupied positions of political influence in campaign teams, such as campaign managers and agents. It was unusual for women to occupy positions that directly influenced political decision making.

Overall, women continue to face significant barriers to equal political participation. From a policy perspective, the Political Parties Integrity Act 2014 has only incentivised some parties to recruit more women and is yet to have an impact on increasing the total number of women candidates standing for elections.

Our research found that voters may claim to want to see more women represented in the national parliament, but are less willing to actually vote for a female candidate. Even in terms of political campaigning, our observations revealed that women candidates were not treated equally to men and more generally, women do not typically occupy roles of political influence. While there are no simple or short-term solutions for improving women’s political participation, our research suggests that future support and policy will need to consider societal factors that affect women’s ability to occupy roles of political influence.

The ANU Department of Pacific Affairs (DPA) ran a large-scale election observation exercise in Solomon Islands prior to, during and following national elections held on 3rd April 2019.

Observations were conducted in 15 of Solomon Islands’ 50 constituencies by 90 observers, 77 of whom were Solomon Islanders. The research comprised of direct election observations and almost 5000 citizen surveys.

This blog was first published as DPA In Brief 2020/19 and has been republished by Devpolicy Blog (devpolicy.org), from the Development Policy Centre at The Australian National University.

This the third in a series highlighting key findings that draw on data canvassed in the 2019 Solomon Islands National General Elections Observation Report. You can find the first and second articles at devpolicy.org.

Colin Wiltshire is a Research Fellow at the Department of Pacific Affairs at the Australian National University. He conducts research on political economy aspects of development in Melanesia. Prior to completing his PhD on the politics of service delivery in PNG, he worked at AusAID where he served in Timor-Leste and PNG.

Joanne Ridolfi was a Senior Project Officer at the Department of Pacific Affairs (DPA) at the Australian National University. Joanne has over a decade of applied policy and program experience in international development, mainly in Asia and the Pacific. She holds a Master of Development Policy from the ANU.

Athena Rogers is a Research Officer at the Department of Pacific Affairs (DPA) at the Australian National University. Athena contributes to DPA’s broader research agenda in Solomon Islands, particularly the Managing Development in Solomon Islands Constituencies project. She has a Master in Applied Anthropology and Participatory Development from the ANU.