Adjusting to the "New Normal" of Working at Home 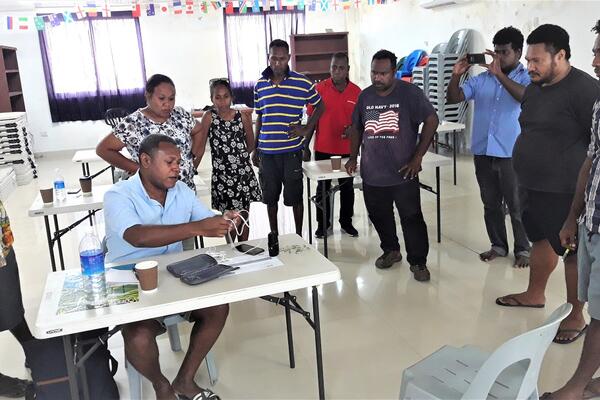 Evan was pleased to share his knowledge and skills to local journalists during a recent training organized by the Pacific Assistance Media Scheme (PACMAS).
Source: Georgina Kekea
By Georgina Kekea
Share
Tuesday, 26 May 2020 11:08 AM

“Last time I was doing an interview suddenly my neighbors started firing up their chainsaw, cutting timber in their backyard”, Evan chuckles as he shared his experience, working from home.

Evan Wasuka is a reporter for ABC’s Pacific Beat program. He mostly covers news and current affairs in the Pacific.

Currently Evan is filing news from Honiara back to the ABC studio in Melbourne, Australia.

Since taking up the position as reporter for ABC in July 2018, Evan has been based in Melbourne.

With his family based in Honiara, before COVID-19 became a pandemic, Evan seized the opportunity to come home.

“During the COVID-19 pandemic, I was given the option to come back to my home country and work which was why I came back”, he said.

Lucky for him, he was one of the few Solomon Islanders to get back into the country, just before the international borders were closed.

Being a reporter, Evan’s job is to interview people, attend press conferences and other important meetings. Every day he has to pitch stories for his rounds that day to his producer based in Australia.

In the newsroom this is called an editorial meeting.

Editorial meetings are part of the time-tested process that journalists use to discuss stories.

“We usually go online for our meeting and each of us will pitch in our story ideas wherever we are located to our producer”, Evan said.

Video conferencing is now the most used platform in offices today.

Since the COVID-19 pandemic, employees are asked to ‘work from home’ with the use of technology as the main medium to stay connected.

Zoom, a popular cloud-based video conferencing application is primarily used by companies to host meetings with remote or international colleagues.

“The internet at home has been better probably because of the fiber optic cable. And it is now much cheaper to use. For my work, I usually spend SBD$20 daily for my calls and data. With the specials I can get one gigabyte data for $9 and 20 minutes call for $5”, Evan said.

In its 2018 annual report, Telecommunication Solomon Islands (TCSI) said since the upgrade of mobile networks to 3G and 4G/LTE technologies, there has been an increased subscriber base along with friendly promotional bundles, providing cheaper and reasonable speed capacity, allowing users to surf the internet more conveniently.

Tethering is the term used for broadcasting a phone's mobile signal as a Wi-Fi network, then hooking a laptop or any other Wi-Fi-enabled device up to it to connect to the internet.

It is sometimes referred to as a mobile hotspot, personal hotspot, portable hotspot or Wi-Fi hotspot.

Evan was pleased to share his knowledge and skills to local journalists during a recent training organized by the Pacific Assistance Media Scheme (PACMAS).

The training was purposely to support journalists with skills and knowledge in how to report safely during a crisis such as COVID-19.

“Most times I only work from home. I get to people through the different messaging applications. For interviews, I usually transmit audio from my phone to a recorder by using the line out cable. I do interviews via Whatsapp, Facebook Messenger and also through normal phone calls”, Evan shared to the journalists.

He said at this time of COVID-19 crisis it is also important for journalists as much as possible to try to practice social distancing.

“Unless it is really necessary for you to attend a gathering then so be it. Otherwise one can just ask for an interview using the technology we have now”, Evan said.

In the current crisis, media workers are said to be as vital as other essential professionals.

Accurate information is said to be very important to minimize the spread of fear.

And being in this profession for almost two decades, Evan believes good journalism is the way to go.

Come rain, sunshine or even a hiccup such as the noise of a chainsaw coming from the neighbors, Evan will have to find a way to send his work to his producer in Australia.

He said his colleagues found it hard to comprehend a chainsaw noise coming right from the residential areas in the city.