RSIPF Rolls Out Awareness Program Ahead of PM Election 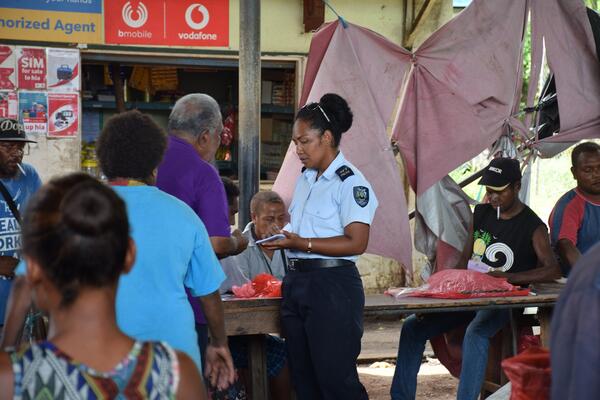 Officers of the Royal Solomon Islands Police Force (RSIPF), National Crime Prevention Department in Honiara are rolling out an awareness program encouraging members of the community to work together as the newly elected Members of Parliament prepare to appoint a new Prime Minister and a new government.

The team started the awareness program today (15 April) with visits to several markets in the capital including King George VI, Fishing Village, Kukum, the Fijian Quarter, Vara Creek, Streets of Point Cruz, White River and the Rove market vendors. They will also visit schools, churches, settlements and other public gathering areas in the coming days to inform members of the public about public safety and how to maintain the peace which was prevalent during the National General Election early this month

Addressing vendors at the various markets, Senior Sergeant Vivian Foanaota says, “I would like to commend the public for the peaceful, safe election and counting period during the past two weeks.”

She adds: “Please accept the results of the counting with a good heart. Let us now work together with the newly elected Members of Parliament as they go through the process of choosing a new Prime Minister and the formation of a new government.”

“Let us show respect for one another which has always been a part of our traditional culture,” Senior Sergeant Foanaota emphasises.

She says, “Don’t hold rallies or public gatherings as police are monitoring the security as we are heading to the election of a new PM.”

Police will not tolerate anyone who takes the law into their own hands if they are not satisfied with the outcome of the election.

Allow the process for the formation of a new Government to run its course.

Let us move forward peacefully with the new Government once it is formed to develop our nation for a better future for everyone in Solomon Islands.

Besides the awareness program, police in Honiara City and Guadalcanal Province are maintaining high visibility patrols and conducting traffic checks during the day and at night at various locations on the roads.