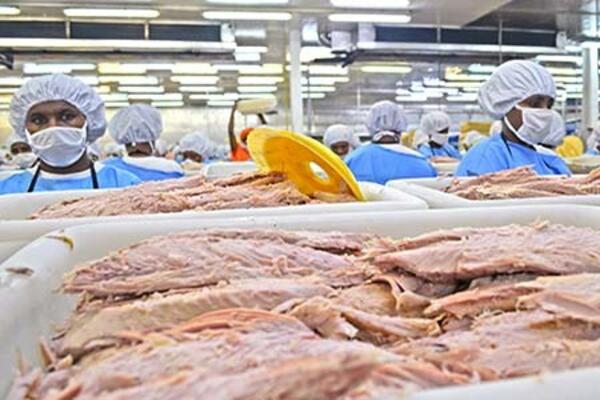 RD Tuna cannery is based in Madang, a growing fish processing hub in PNG.
Source: Supplied
Share
Wednesday, 27 March 2019 10:06 AM

The Chief Executive of the Manufacturers Council of Papua New Guinea, Chey Scovell, has given an upbeat assessment of the prospects for the manufacturing sector. He tells Business Advantage PNG that the mood, while cautious, is becoming more optimistic.

‘In 2018, people were hesitant. It was a case of 50/50: things could go either way,’ Scovell tells Business Advantage PNG.

‘I think that the consensus now is one of cautious optimism—although the manna is not falling from heaven.’

Scovell says one big catalyst for change has been reform on tariffs, offering better protection to PNG manufacturers.

He says these reforms were announced in 2016 but were not ‘enabled in legislation’. In the last two Budgets, however, the changes were made law and businesses have responded.

‘Those tariff reforms have resulted in significant investment, including re-capitalisation of existing manufacturers, like Coca-Cola, Pacific Industries and Paradise Foods.

‘There has also been a whole number of new entrants. American Cola, the soft drink brand took up a chunk of the market.

Scovell says changes to subsidies in the tuna industry have also had a galvanising effect.

‘What happened in the past is that most of the fisheries located in PNG were a type of dual-structure business.

Scovell says some companies used the subsidy to provide cheap fish to their overseas operations, only processing a small proportion of the catch—as low as three-to-five per cent.

An exception was RD Tuna, which used to process about 75-80 per cent of their catch in PNG in the peak season.

‘Now, it is a rebate based on the volume that you process (manufacture).

‘Within six months, we saw a doubling of the output on the processing side and now we are we are seeing between two and three times [the pre-changed subsidy level]. ‘They have gone from running one short shift a day to running two or three full shifts. Some of them have gone to almost 24-hour production.

‘That has been a huge success, creating more labour and revenue.’

Scovell says better prospects in the oil and gas and mining sectors will have an effect on manufacturing.

‘That has got a lot of people excited, particularly in the construction and housing sector as well as the Fast-Moving Consumer Goods sector.’

Scovell notes that with the establishment of a ministerial oversight committee on resources they are having a meeting every week.

He says the hope is that work will start on some of the resources projects ‘towards the end of the year’.

‘That is going to be huge; it is some of the early spend.

‘I am also buoyed by the fact that the government is saying there must be a heavy weighting towards local content, particularly on the early spend.’

He says he is ‘not hearing resistance’ to using local providers, whereas with previous projects ‘contracts were given to people outside the country.’

Scovell says anther boost to prospects in the manufacturing sector is the establishment of the Papua New Guinea Electrification Partnership (PEP).

He says that will change power provision in the country, which is a crucial input into manufacturing.

‘One of issues is you can build all the infrastructure, but how can you do it on a commercial basis?

‘The PEP gives grants to build infrastructure even in areas where you don’t have the business case to justify financing it.’

Scovell believes that boosting PNG’s manufacturing industry is essential to achieve greater diversification in the economy. Diversification is one of the government’s major priorities because it is considered a way to protect against the impact of volatility in the resources sector.

‘We believe manufacturing is critical to diversifying the economy. The more value added you can do the better.

‘If you are talking agriculture, for example, value-adding is critical.’