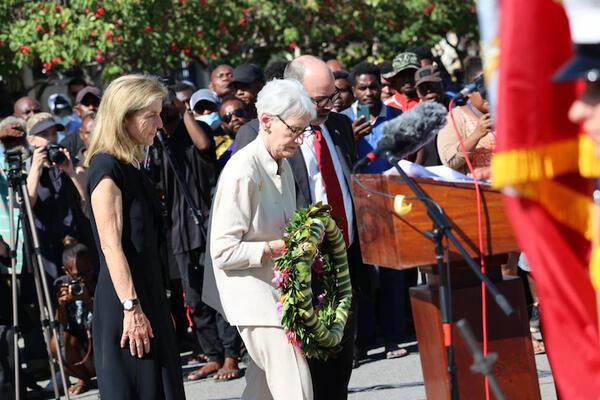 Strengthening ties with the Pacific is a priority for the Biden administration, says a top US diplomat, while warning the region faces a struggle from countries that seek to coerce and pressure the Pacific Islands family.

US Deputy Secretary of State Wendy Sherman travelled to the Solomon Islands capital of Honiara as part of an inter-agency delegation to attend a memorial for the 80th anniversary of the Battle of Guadalcanal.

In a speech Ms Sherman gave at the US-hosted event in Skyline Ridge, the site of the US Guadalcanal Memorial, she said the US was committed to "reinvesting" in their relationship with Pacific partners "to address the challenges" of the coming decades.

"President (Joe) Biden has made solidarity with the Pacific Islands a priority for his entire administration from the very beginning," she said.

"We see cooperation with the Pacific Islands as absolutely critical to the future of the entire region."

In a seeming reference to the mounting tensions with China in the region, as well as current conflicts in Ukraine and elsewhere, Ms Sherman criticised world leaders who used "coercion, pressure, and violence" as tools to disrupt peace.

"We have seen around the world... [leaders] who seem to have forgotten the awful lessons learned here, or perhaps never took them to heart in the first place," she said.

"Today we are once again engaged in a different kind of struggle — a struggle that will go on for some time to come."

Ms Sherman said it was "up to us" to realise a future defined by shared values and vision for a "free and open, and prosperous and secure, and above all peaceful Indo-Pacific".

Also present at the event was the US ambassador to Australia Caroline Kennedy.

She paid respect to Solomon Islanders who had "risked their lives" to help the allied forces hold Guadalcanal during WWII.

Ms Kennedy said countless Americans and family members of allied personnel have the Solomon Scouts and Coastwatchers to thank for the survival of many during the war.